Brookfield Power has completed a US$3M enhancement project at its 4MW Allens Falls hydroelectric generating plant on the St. Regis River in Parishville, New York, US. 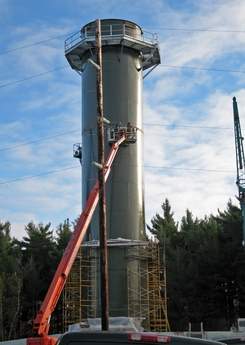 The project included the installation of a surge tank (shown below) to replace a tank that had been in service since the 1920s. The surge tank acts similar to a relief valve whereby it absorbs the kinetic energy of the water should the turbine shut off, allowing the excess water to flow up the tank. The new surge tank adheres to requirements set by FERC to withstand a seismic event.

The company also removed 457.2m of pipe that carried water from the St. Regis river to the Allens Falls plant. It was replaced with new foundations, ring girders and 457.2m of new, 2.1m diameter steel pipe.

New steel pipe was laid as part of the upgrade project