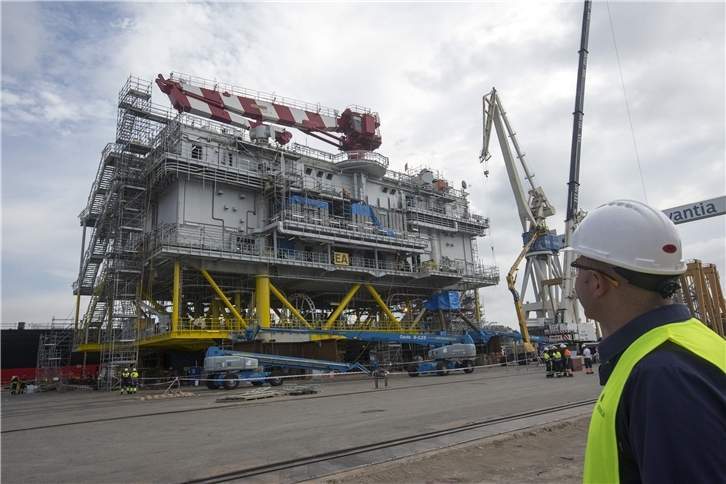 Navantia, as part of a contract awarded earlier, has built the Andalusia II substation for the East Anglia One wind farm.

Being developed with an investment of more than €3bn, the East Anglia 1 offshore wind farm will feature 102 wind turbines, which will be supplied by Siemens Gamesa from its facilities in Hull, in the north-east of England.

Iberdrola said in a statement: “The delivery of this unit, achieved in the agreed upon times of 16 months of work, has allowed the creation of an average of 450 jobs -mostly local ones-, which at peak times of work increased to 600 people.”

Said to be the biggest of its kind, the alternating current (AC) offshore substation will set sail in from Puerto Real for English waters at the beginning of August to reach the wind farm construction site in British waters.

The Andalusia II, which has been constructed entirely at Navantia’s Puerto Real shipyard, is said to be the central nucleus of the wind farm. It is planned to be installed at the wind farm towards the end of August or the beginning of September this year.

Featuring design innovations suggested by Iberdrola, the substation will be able to collect the electricity produced by the wind turbines and transform it from 66kV to 220kV following which the power is transmitted subsequently through the marine cable to earth.

Upon commissioning in 2020, the East Anglia One will be able to generate clean electricity required to power nearly 600,000 London households.

Earlier this year, Iberdrola and Navantia held a ceremony to mark the delivery of the first four ‘jacket’ foundations for the East Anglia One wind farm.

The jacket foundations and the piles for the offshore wind project are being built jointly by the Navantia-Windar consortium as part of a contract awarded earlier.

The contract involves supply of 42 jacket-type structures and 126 piles from the Fene shipyard and Windar’s facilities in Avilés.