Nanticoke Solar Project completed on budget and on schedule

Ontario Power Generation (OPG), in partnership with the Six Nations of the Grand River Development Corporation and the Mississaugas of the Credit First Nation, has completed its first-ever 44-megawatt solar facility at the former Nanticoke Generating Station site. 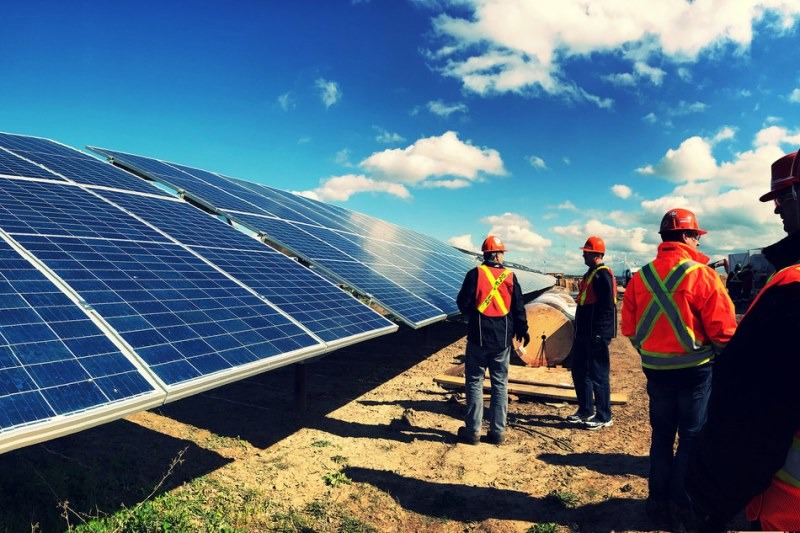 In 2016, the Independent Electricity System Operator awarded a contract to OPG and its partners to build Nanticoke Solar. OPG has a proud history of working in partnership with First Nations. This is our fourth First Nation partnership and it will further the legacy of producing more clean and renewable power for the province. PCL Construction was awarded the construction contract for the Nanticoke Solar Project on March 13, 2018. It was also awarded the supply contract for the project’s photovoltaic (PV) solar panels and racking system.

Located near Port Dover on the shores of Lake Erie, the former Nanticoke Generating Station was first brought into service in 1972 and had a peak capacity of approximately 4,000 megawatts of power. The station burned its last piece of coal on Dec. 31, 2013. The following year, Ontario became the first jurisdiction in North America to eliminate coal as a source of electricity production. Demolition of the Station’s powerhouse is scheduled for September 2019 and will be followed by site restoration in 2020.

OPG is one of the most diverse electricity generators in North America. It produces about half of the electricity Ontarians rely on every day, and its clean, safe, power costs an average of 40% less than other generators.

“We’ve partnered with the Six Nations of the Grand River Development Corporation and the Mississaugas of the Credit First Nation, on this important initiative,” said OPG’s Mike Martelli, President of Renewable Generation. “Building and sustaining a clean, low cost electricity system is fundamental to a healthy environment and a strong, low-carbon economy. Nanticoke Solar is a continuation of OPG’s rich legacy of generating electricity in this community.”

“Investment opportunities, such as the Nanticoke Solar Project, are direct contributors to the Six Nations Economic Development Trust which provides critical funding used to address our Community’s needs and priorities,” said Chief Ava Hill of the Six Nations of the Grand River.

“We are committed to investing in sustainable partnerships that deliver not only economic benefits but also employment & training opportunities to our beneficiary – the Six Nations Community,” said Hilary Visheau, Chair of Six Nations Grand River Development Corporation’s Advisory Committee.

“The Mississaugas of the Credit First Nation hail this partnership as an important economic development,” Chief Stacey Laforme said. “This is a very positive development for MCFN. Gone are the days when our First Nation suffered the burdens of the development of our territory without sharing in the benefits. This project, along with others, sets the stage for future mutually-beneficial partnerships with OPG and others about developments across our territory. We look forward to working with OPG as partners in this project as it moves ahead.”

“Our company takes pride in all of the projects we build, and the Nanticoke Solar Facility is one of many exciting PCL-built projects in the rapidly growing sustainable energy sector,” said Andrew Moles, PCL Construction’s Director of Solar. “Through the expertise of our solar energy team, and the relationships fostered with top suppliers and consultants, we were able to construct, generate and store reliable, renewable power quickly and efficiently, while ensuring the highest standard of quality for OPG, First Nations and the local community.”