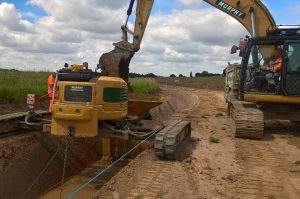 Located 32kms off the Lincolnshire coast, the Triton Knoll offshore wind farm will have capacity to produce clean electricity required to power over 800,000 UK households per year.

The deal, which is said to be Triton Knoll’s first major construction contract, comes as the project begins initial onshore works. The main construction of the substation and cable route scheduled to commence later this summer.

Initial works comprise construction of a temporary office and several temporary construction compounds, the preparation of various access roads along the route, the establishment of speed restrictions on several major roads, as well as topsoil stripping along parts of the onshore cable route.

Murphy, which has already begun working on the design, is now preparing to install the onshore cable circuits as part of the project’s electrical system.

“Murphy has already engaged local firms during preliminary works for Triton Knoll, and has demonstrated their willingness to continue working with us to ensure we can maximize opportunities from our investments for local and UK businesses, throughout the project lifecycle.”

Murphy is also planning to subcontract work to local companies to help with civil engineering, excavation and horizontal directional drilling for the project.

Murphy CEO John Murphy said: “This is one of the biggest power projects that Murphy will have worked on and it’s a real marker of the upward direction in which our business is going, as we continue to develop and grow.

“To have been chosen for such a large and prestigious project shows that we are trusted by innovative companies like innogy to deliver world-class infrastructure projects that will improve people’s lives.

“It’s an incredibly exciting and complex project, and we’re looking forward to working closely with innogy to provide first-rate results.”