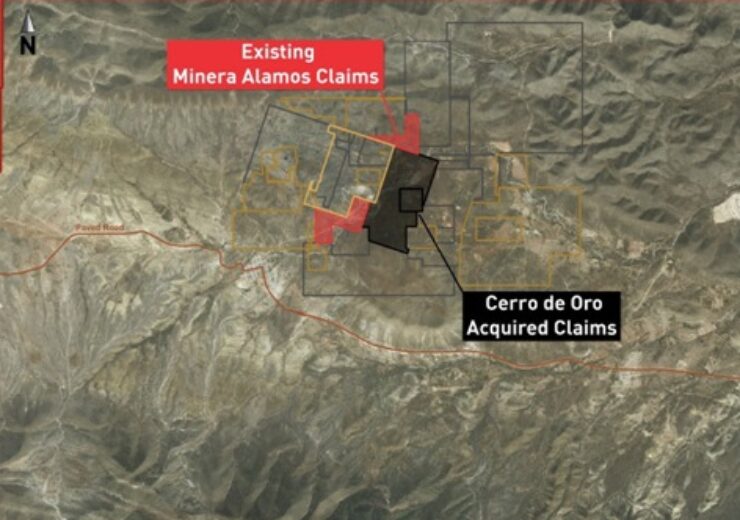 The acquisition of the project, which comprises the Zacatecas I and Zacatecas II concessions near Concepcion del Oro, Zacatecas, Mexico, is subject to approval of the TSX Venture Exchange.

It is located less than 3km from the town of Melchor Ocampo and approximately 30km from the district’s mining hub at Concepcion del Oro.

The purchase of the two core claim comprising a gold project with 76 holes and 8200 m of historic drilling will boosts Minera Alamos’ total claim holdings in the Concepcion del Oro district to about 6,500 hectares.

Minera Alamos said that the two concessions are bounded by its existing concessions. They are surrounded by a larger claim that is also owned by the company, which provides all the necessary land for the development of the deposit.

Minera Alamos CEO Darren Koningen said: “The Cerro de Oro gold project has many characteristics that mimic the El Castillo gold mine our team developed under the Castle Gold Corporation banner from 2007 until its eventual sale in 2010.

“Cerro de Oro contains a large disseminated gold system with a significant oxidation profile and a low implied strip ratio with the majority of mineralized areas outcropping at surface.

“Northern Zacatecas has a rich mining history and hosts some of the largest gold deposits in north-central Mexico.”

The acquisition of Cerro de Oro adds to Minera Alamos’ portfolio of Mexican assets that include Santana in Sonora that is currently under construction with first gold production targeted in early 2021.