MHPS to support power plant operation and maintenance in Uzbekistan

The MoU is applicable for three power plants including the Navoi plant operated by Thermal Power Plants of Uzbekistan, the Navoi-2 and Turakurgan plants 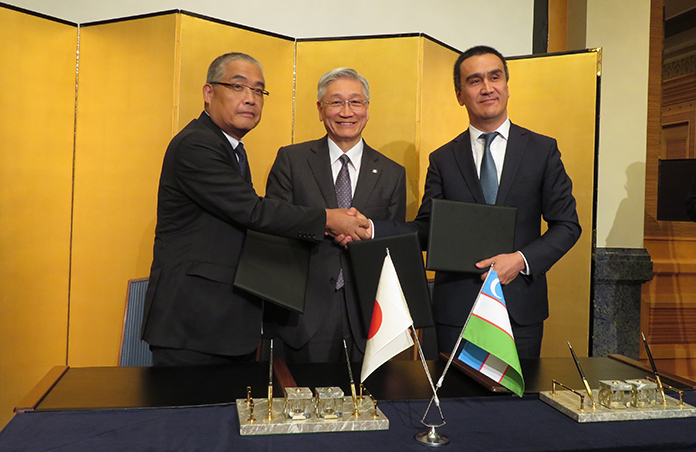 Image: MHPS has signed a memorandum of understanding (MOU) with the Ministry of Energy of the Republic of Uzbekistan. Photo: Courtesy of Mitsubishi Hitachi Power Systems.

Mitsubishi Hitachi Power Systems (MHPS) has signed a memorandum of understanding (MOU) with the Ministry of Energy of the Republic of Uzbekistan to support the operation and maintenance of thermal power plants in Uzbekistan.

The agreement was signed at the 15th round of the Uzbek-Japanese Economic Cooperation Forum, a series of joint economic talks between Uzbekistan and Japan, held in Tokyo.

Aimed at promoting bilateral trade and economic development, the agreement is set to advance discussion of a Comprehensive Service and Maintenance Program (CSMP)

MHPS said that the CSMP incorporated into the newly concluded MOU is aimed at enhancing the O&M technologies and is applicable for three power plants including the Navoi plant operated by Thermal Power Plants of Uzbekistan, the Navoi-2 and Turakurgan plants.

MHPS has previously supplied equipment for Navoi plant, and other two power plants are currently under construction.

In addition, it has committed to provide parts, supply gas turbines for the power plants, assign engineers to the sites to for regular inspections, and train Uzbekistan’s Thermal Power Plant of Uzbekistan’s engineers in O&M using IoT.

MHPS, in a statement, said: “Through these initiatives, the aims will be to provide high-quality O&M technology to the local company and, in the future, to elevate the gas turbine O&M skills of the local engineers.”

MHPS-supplied equipment accounts for 20% of the total equipment at power generation facilities of Thermal Power Plants of Uzbekistan.

The Japanese firm said: “Going forward, MHPS looks to maintain and further develop its close relationship with Thermal Power Plants of Uzbekistan as its way of contributing to stable and efficient power provision in Uzbekistan.”