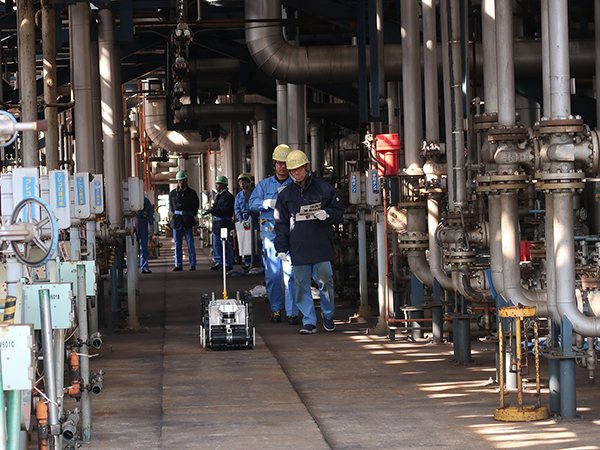 The robot comes with explosion protection features to limit the danger of the robot itself igniting an explosion or fire from electric sparks or heat, even in areas with flammable gas.

The test was conducted jointly with JXTG Nippon Oil & Energy Corporation at its Mizushima Refinery in Kurashiki, Okayama Prefecture.

During the test, the EX ROVR moved autonomously through several floors of the narrow plant building including navigating stairs, collected data from its various sensors, and managed continuous automated operation including charging at a docking station. The robot is still in development, but the test confirmed that it meets the requirements for basic functionality to conduct routine patrol inspections at JXTG Energy’s plant, and handle emergency situations. MHI and JXTG Energy will thoroughly analyze the test results to further resolve issues, and make improvements.

MHI is developing the explosion-proof plant inspection robot based on its success with robotics technologies in such areas as support for nuclear plant accident containment. The EX ROVR has an explosion-proof design that complies with Japan’s explosion-proof guidelines, as well as the ATEX and IECEx (Note1) explosion protection standards widely adopted in Europe and around the world, allowing it to be used safety in areas with an explosive gas atmosphere (Zone 1). MHI will conduct further tests and demonstrations in a range of plant environments in order to improve the check density and enhance safety, with the aim of commercialization.