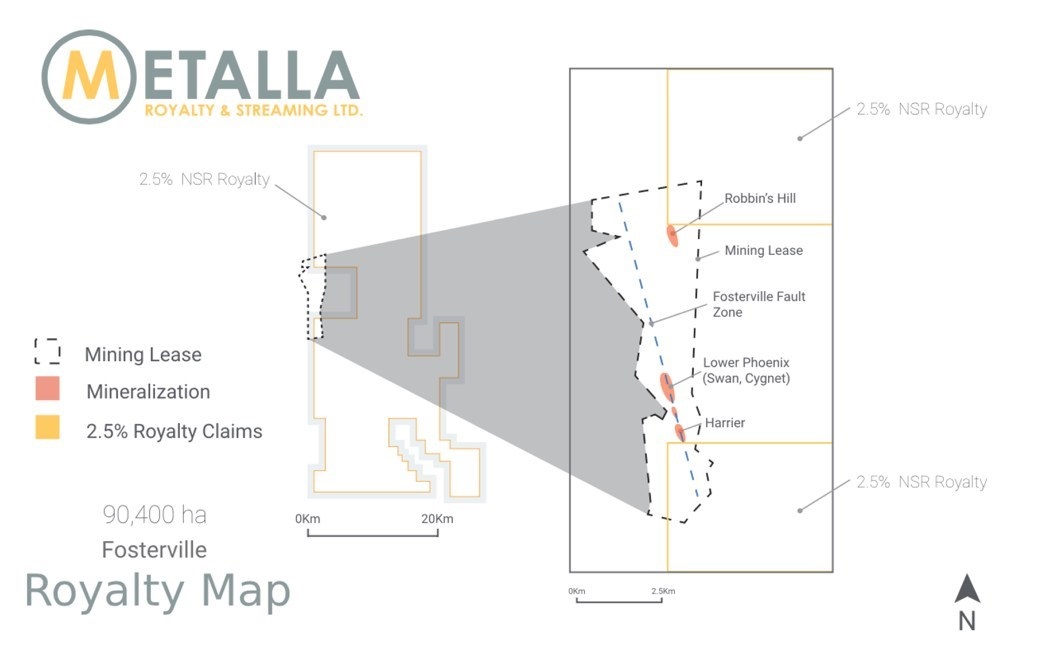 Metalla Royalty & Streaming has entered into a purchase and sale agreement with NuEnergy Gas to acquire an existing 2.5% net smelter return royalty interest (the “Royalty”) on the northern and southern portions of Kirkland Lake Gold Ltd.’s (“Kirkland Lake”) (NYSE: KL) operating Fosterville mine (“Fosterville”) for a total consideration of AUD$6 million, consisting of AUD$4 million in common shares of Metalla (“Metalla Shares”) and AUD$2 million in cash.

Brett Heath, President & CEO of Metalla commented, “This transaction marks our 50th royalty asset in less than four years and we are pleased to add a royalty on an iconic mine for the gold sector and major counterparty in Kirkland Lake into our growing portfolio. Kirkland Lake has made an incredible discovery on the Fosterville Mine in the last few years, and we are excited to have exposure to the southern and northern extensions of the high-grade deposits which include the Swan zone, Harrier, and Robbin’s Hill. This transaction provides shareholders with exposure to one of the highest-margin gold mines on the planet, and with nine rigs currently drilling at Fosterville we see strong potential for further high-grade discoveries (1,2).”
Mr. Heath continued, “We are excited to partner with NuEnergy using our third-party model and welcome them as a new shareholder of Metalla. The transaction provides NuEnergy with a more efficient way to maximize long-term value through holding the royalty through our equity, provides for immediate and long-term liquidity, exposure to the diversified growing portfolio, and more attractive public market premiums.”

Metalla has agreed to acquire a 2.5% Royalty from NuEnergy for a total purchase price of AUD$6 million. Metalla will satisfy the consideration for the Royalty by paying AUD$2 million in cash and issuing 467,730 Metalla Shares representing AUD$4 million in value based on the ten (10) trading day volume weighted average price of the Metalla Shares on the TSX Venture Exchange (the “TSXV”) prior to this announcement. The transaction is subject to other customary closing conditions, including obtaining the requisite TSX Venture Exchange and NYSE American approvals, Foreign Investment Review Board (“FIRB”) approval from the Government of Australia and is expected to close in October 2020.

Fosterville is a high-grade, low cost underground gold mine in Victoria, Australia which has been in production since 2005. In 2019, Fosterville produced 619koz gold at a grade of 39.6 g/t and a cash cost of US$119/oz and AISC of US$291/Oz. Kirkland Lake recently reissued its guidance for 2020 at Fosterville where it anticipates producing 590 – 610koz of gold at an operating cost of US$130-US$150/Oz of gold. In 2015, drilling at depth on the Phoenix decline led to the discovery of the high-grade Eagle/Swan Zone, containing mineralization which resulted in a large increase in reserve grade for the mine and production. Similar zones at depth have been documented at the Harrier Zone which continues to extend south toward Metalla’s royalty claims. A ramp up in mining in the Harrier zone is anticipated to begin once development and ventilation upgrades are completed. Kirkland Lake has stated they are undergoing US$70 – US$80 million dollars of exploration and development drilling at Fosterville with a focus on the highly prospective Harrier south area where they have disclosed they have intersected quartz veins with visible gold similar in texture to those found in the Swan Zone.

The Royalty covers the southeastern and northeastern sections of the Fosterville mining lease and a large area east and south of the mining lease. Mineralization at the Harrier and Phoenix/Swan Zone are on strike with the royalty grounds in the south. We expect the Harrier mineralization to continue onto the royalty area after further resource conversion drilling is completed. The Royalty claims currently do not cover any publicly disclosed and NI 43-101 compliant reserves or resources. The Russell’s Reef and Hallanan’s prospects are within the southern royalty grounds. In the north, Robbin’s Hill is on strike with the royalty grounds as well with the Goornong South prospect further north.

Silver Lake to go ahead with Deflector South West in Australia