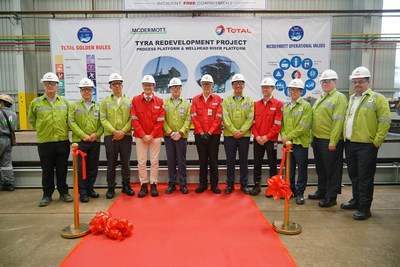 The Tyra Redevelopment project is aimed at enabling continued production from the Tyra field. After completion of the project, the offshore Danish field is anticipated to have a peak production capacity of nearly 60,000 barrels of oil equivalent per day.

To mark the start of fabrication work for the Tyra Redevelopment project, McDermott had a first steel-cutting ceremony at its fabrication yard located in Batam, Indonesia.

Under a contract from French oil and gas giant Total, the Texas-based McDermott will fabricate and assemble two separate work packages, made up of seven topside structures, six connecting bridges and six jacket extensions.

McDermott Europe, Africa, Russia and Caspian senior vice president Tareq Kawash said: “As the project continues to progress with the completion of engineering, we are moving ahead with fabrication in full compliance with the stringent technical requirements for the North Sea in Denmark.

“We expect to meet the final timeline for the two work packages scheduled for delivery in early 2020 and 2021.”

It was in December 2017 that McDermott had won an engineering, procurement, construction and onshore commissioning contract from Maersk Oil, which was merged into Total in March 2018. The contract is valued between $500m and $750m.

McDermott president and CEO David Dickson said: “Like all of our projects throughout the world, we are applying the One McDermott Way to the Tyra project.

“This proven model helps us reduce costs, ensure certainty and drive execution excellence while maintaining our industry leading safety record. In turn, this delivers quality and value for our customers.”

Earlier this month, Royal Boskalis Westminster (Boskalis) was given a subsea installation contract from Total E&P Denmark for the Tyra Redevelopment project.

The Total-led Danish Underground Consortium will be closing the Tyra gas field in November 2019 with a target to commence production from the Tyra Redevelopment project in July 2022.