Dubai Electricity and Water Authority (DEWA) along with a consortium led by ACWA Power and Silk Road Fund have achieved a financial close on the 950MW fourth phase of the Mohammed bin Rashid Al Maktoum Solar Park (MBR Solar Park) in Dubai. 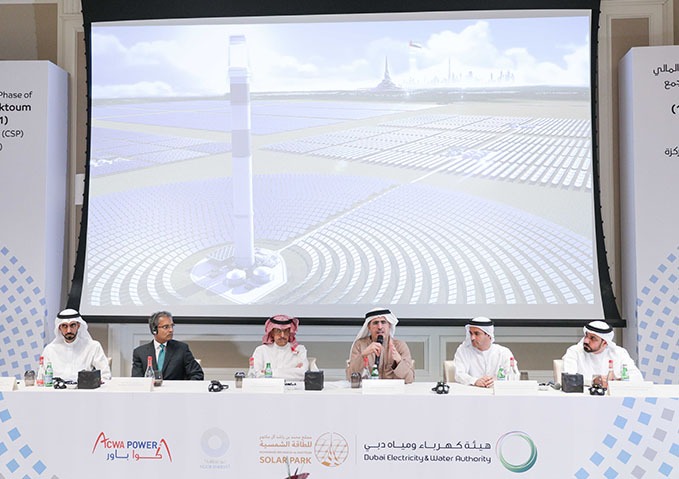 The MBR Solar Park fourth phase is supported by lending group made up of several banks that include Agricultural Bank of China, Bank of China, China Everbright Bank, China Minsheng Bank, Commercial Bank of Dubai and others.

The fourth phase of the solar park also called Noor Energy 1 will feature the installation of a concentrated solar power (CSP) project based on the independent power project (IPP) model along with two other power generation technologies.

The 950MW hybrid power plant that will constitute the fourth phase will include 600MW power generation from a parabolic basin complex, 100MW from a 260m long solar tower, and 250MW from solar photovoltaic (PV) panels. The total investment for the project will be AED16bn ($4.36bn).

The CSP project will also have a thermal storage capacity of 15 hours.

DEWA MD & CEO Saeed Mohammed Al Tayer said: “Financing the fourth phase of the solar park is the largest equity bridge loans in the region, in cooperation with a number of leading local and international banks.

“This reflects the confidence of financial institutions in the major projects adopted by the Government of Dubai, especially in light of the regulatory framework that stimulates innovation and attracts investments and the transparency we deal with in all our projects, as well as DEWA’s strong financial position.”

The fourth phase of the Dubai solar park is expected to meet the power consumption needs of 320,000 residences while offsetting 1.6 million tons of carbon emissions annually.

Originally, the plan for the fourth phase of the MBR Solar Park was to add 700MW of capacity. An additional 250MW was added to the project in the form of solar PV generation last November. In this regard, DEWA amended the power purchase agreement (PPA) with the ACWA Power-led consortium with the capacity addition made at a cost of $0.24 per kilowatt hour (kWh).

ACWA Power chairman Mohammad Abdullah Abunayyan said: “Since the beginning of our partnership with the Dubai Water and Electricity Authority, the Noor Energy 1 project has grown in both scale and in its ability to revolutionise the global energy landscape.

“The successful closure of the project with renowned international players corroborates the potential of Noor Energy 1 and also maintains our reputation as a partner of choice, delivering projects that contribute to the growth and development of vibrant economies such as that of Dubai.”

Earlier this month, DEWA issued a Request for Qualification (RFQ) for the 900MW fifth phase of MBR Solar Park. To be developed in phases, the AED50bn ($13.6bn) solar park aims to have a power generation capacity of 1GW by 2020, and 5GW by 2030.