The project will connect Shetland to the main GB energy system for the first time, supporting Shetland’s future security of supply as well as enabling the connection of renewable energy generation 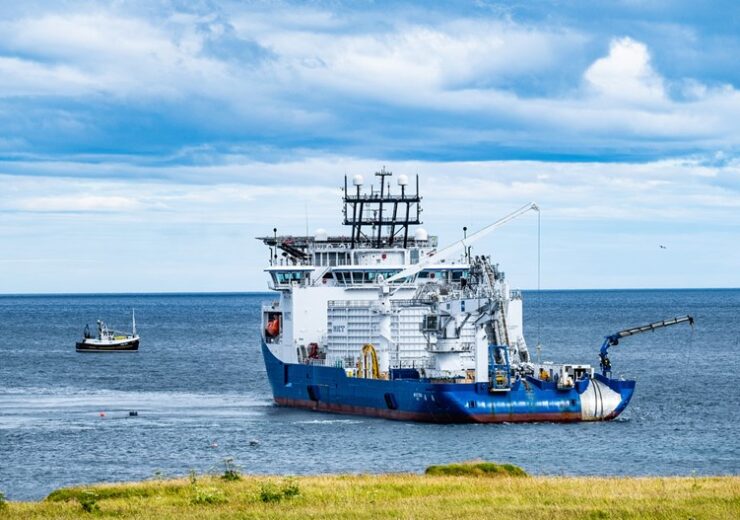 The first phase of cable laying as part of the SSEN Transmission Shetland High-Voltage Direct Current (HVDC) Link began this week off the coast of Caithness, marking a major milestone in the £660M project.

The project will connect Shetland to the main GB energy system for the first time, supporting Shetland’s future security of supply as well as enabling the connection of renewable energy generation.

The beginning of the cable was successfully pulled-in to where it makes landfall at Noss Head near Wick from aboard the specialist cable-laying vessel NKT Victoria.  The vessel is currently working her way out to sea along the designated cable route and carefully installing the first 100km of subsea cable and fibre optic cable on the seabed.

The vessel set sail earlier this week and is expected to complete the first 100km of cable laying by mid-July.  This significant milestone follows on from the recent successful clearance of boulders along the proposed route of the Shetland HVDC link and the ongoing work to create a clear corridor in preparation for the cable installation. Once the cable is in place on the seabed, it will be trenched into position using the Grand Canyon III, a multi-role construction support vessel with a specialist subsea jet trencher, which will ensure the cables are buried to the correct depth.  Rock placement will also take place at some sections to ensure the cables are protected where trenching is not possible.

The purpose-built cable laying vessel NKT Victoria will lay the cables in three campaigns – the first from Noss Head in Caithness along 100km of length to a point to the east of the Orkney isles which is currently underway.  The second campaign is expected to begin in March 2023 and will involve another 57km of cable from Weisdale Voe on Shetland heading south.  The third campaign will take place later in 2023, which will complete the link between the first and second campaigns in the North Sea to join all three campaigns together to complete the full 260km subsea HVDC link.

“We are delighted that specialist cable laying vessel NKT Victoria has begun this major milestone in kicking off the first subsea cable installation campaign on the Shetland HVDC link.

“The installation of the subsea cable is one of the major components of the Shetland HVDC link project, and it marks an exciting step in the project for SSEN Transmission and our contractors, and we look forward to the completion of this first subsea cable campaign over the coming weeks.”