The Saudi Arabian Mining Company (Ma'aden), through its wholly-owned subsidiary, Ma'aden Gold and Base Metals, has awarded a contract to Outotec and Larsen&Toubro consortium for the Mansourah & Massarah Project. 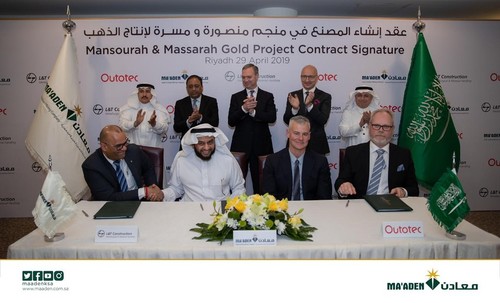 Image: Ma'aden Gold and Base Metals has awarded a contract to Outotec and Larsen&Toubro Consortium for the Mansourah & Massarah Project. Photo: Courtesy of Maaden - Saudi Arabian Mining Company.

Ma’aden said that the contact has been awarded for engineering, procurement, construction, pre-commissioning, commissioning and start-up assistance of the project.

The Mansourah & Massarah project, including mines, processing plant and associated infrastructure is expected to be located in one of the richest geological areas, the Central Arabian Gold Region in the Kingdom and is planned to be completed in 2022.

Ma’aden said that the project would become its largest gold project, which will involve an expected total investment of $880m. The mine is capable of producing an average of 250,000 ounces of gold per annum over the life of mine.

In addition, the processing plant is capable of processing four million tons of the complex refractory ores contained in the deposit per annum, which marks the first time such ores have been mined and processed in the Middle East.

Maaden chief executive officer and chief executive officer Darren Davis said: “Mansourah & Massarah deposit are purely Ma’aden sole discovery where no previous work have been implemented in that area by any previous mission and we are proud of this project which was discovered through the activities of the Ma’aden Exploration Team, which carries out extensive mining exploration programs, as announced earlier this year.”

“This project is an important element of our strategy to increase our gold production to one million ounces a year. Our continued growth in the Kingdom will create many direct and indirect job opportunities in the Saudi economy and contribute to the development of communities around our operational areas.”

Ma’aden claims that sustainability is a key element of the project, which will be the first in the Kingdom to use solar power as an energy source. The project will also be supplied with treated wastewater through a 430km pipeline from the municipality of Al Ta’if to the remote and water scarce region where the mine will be located.