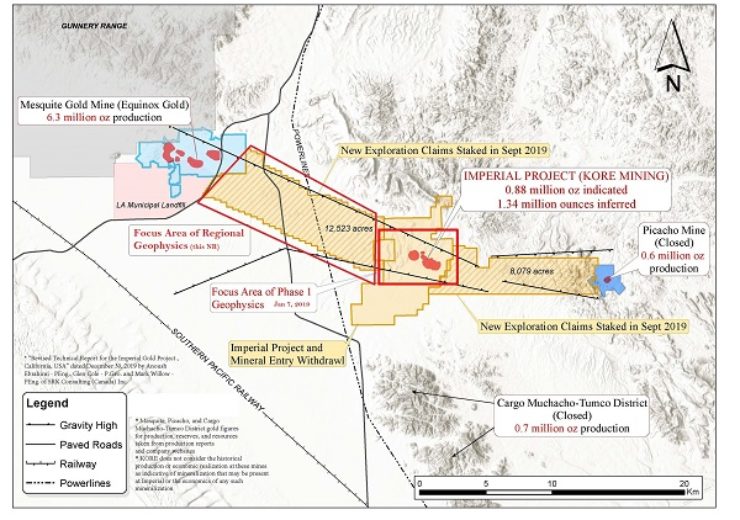 KORE Mining Ltd. (TSXV: KORE) (OTCQB: KOREF) (“KORE” or the “Company”) is pleased to announce is mobilizing a ground geophysics and surface sampling program (“New Exploration Program”) on the Mesquite East and Imperial West areas of the Mesquite-Imperial-Picacho District exploration project (“District”) to generate further drill targets. KORE is also permitting the highest priority drill pads for District targets towards the Mesquite Mine (Equinox Gold |TSX:EQX) and in and around the current Imperial resource.

Scott Trebilcock, President and CEO of KORE, stated, “Imperial County is a prolific mining District with almost 150 years of modern gold mining history.  The Mesquite-Imperial-Picacho District trend is a high priority to expand KORE’s already large resource base. KORE will be targeting both near surface resources to enhance the Imperial project PEA while targeting blue-sky new discoveries on our 26,000 acres of claims.  The work kicked off today will help us prioritise the large array of District targets and we are excited to explore this district with modern exploration methods, never used before in this district.”

KORE owns 100% of the District which consists of 26,323 acres on 1,007 claims captures the entire 28-kilometer trend from the operating Mesquite mine (Equinox Gold |TSX:EQX) to the closed Picacho mine and including KORE’s Imperial project.   In the District, gold is hosted in local fault structures related to a series of regional faults connecting the known District deposits.  Those three District deposits (Mesquite-Imperial-Picacho) were discovered in exposed outcrops and from placer workings.  The rest of the District is covered by alluvium and has never been systematically explored.  Having the intact Imperial deposit to “tune” or “fingerprint” geophysical signatures, greatly enhances the ability to explore and target deposits under the alluvium and make new discoveries along the trend.

Previously, KORE completed two rounds of ground geophysics, the first to “tune” the system over its Imperial deposit and the second to define exploration targets on the western half of the District exploration project.

Drill permits at Imperial are with the US Federal agency, the Bureau of Land Management (“BLM”).  KORE is completing a Plan of Operations process for the permits which is expected to take three to six months. KORE is committed to operate to the stringent environmental and labour standards of California.  KORE plans to concurrently reclaim drill pad locations and ensure measures are taken to mitigate any impacts to biological and cultural resources.