The terminal will convert hydrogen gas from Latrobe Valley brown coal into liquefied hydrogen, which is then stored and loaded onto the marine carrier for transport to Japan 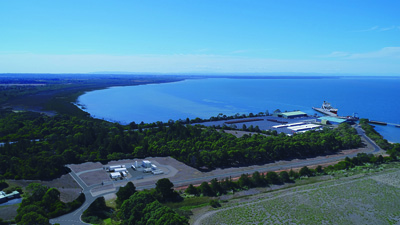 Image: The hydrogen liquefaction and loading terminal is being constructed in Australia. Photo: courtesy of Kawasaki Heavy Industries, Ltd.

The terminal, which is being built for the Hydrogen Energy Supply Chain (HESC) pilot project (Project), will be equipped to convert hydrogen gas from Latrobe Valley brown coal into liquefied hydrogen.

The resulting liquefied hydrogen is stored and loaded onto the specialised marine carrier for transport to Japan.

Construction work on the terminal includes building and mechanical installation of a liquefaction facility and a storage container.

Kawasaki board chairman Shigeru Murayama said: “Delivering clean hydrogen to the world for the benefit of our environment is a goal we share deeply and we look forward to achieving.

“The hydrogen economy is already materialising in Japan, and it is wonderful to now be breaking ground here in Australia. We are excited to be translating our joint hydrogen vision into reality.”

Being developed in two phases, the HESC project aims to establish an integrated commercial-scale hydrogen supply chain to deliver liquefied hydrogen to Japan.

The pilot phase involves demonstration of a fully integrated supply chain between Australia and Japan over one year by 2021.

Under the second phase, the decision to proceed with the commercial phase will be made in the 2020s with operations scheduled to commence in the 2030s.

It will be subject to successful completion of the pilot phase, regulatory approvals, social licence to operate and hydrogen demand.

The pilot phase is planned to be established in the Latrobe Valley Victoria, Australia at the AGL Loy Yang Complex.

Backed by the Victorian, Commonwealth and Japanese governments, the HESC pilot project is being developed by a consortium of energy and infrastructure companies. It is set for completion by June 2020.

Minister for Resources and Northern Australia Matt Canavan said: “Australia is well placed to become a global leader in hydrogen production and this pilot project is a crucial step towards making this vision a reality.

“The use of hydrogen is part of Japan’s vision of a clean energy future and any emissions from the pilot project will be fully offset, with commercial scale operations required to use carbon capture and storage to ensure a low emission source of hydrogen.”