500-ktpa smelter to be the largest copper smelter in Africa, and one of the world’s largest single-line smelters 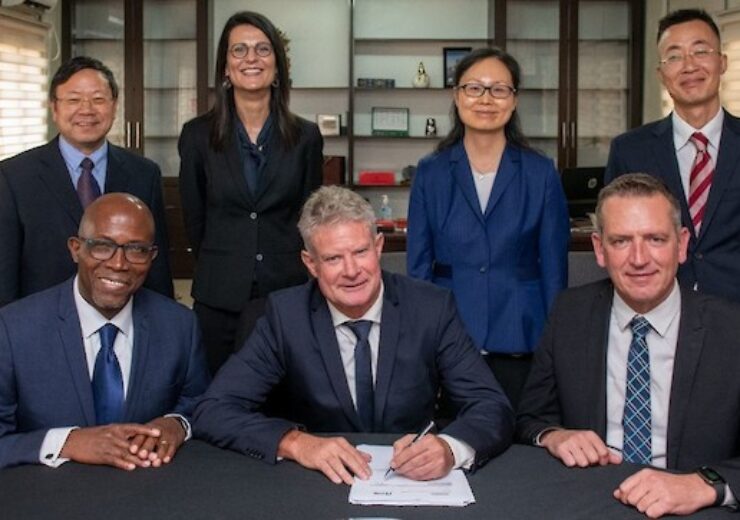 Ivanhoe Mines (TSX: IVN; OTCQX: IVPAF) Co-Chairs Robert Friedland and Yufeng “Miles” Sun are pleased to announce that Kamoa Copper has awarded China Nerin Engineering Co., Ltd. (Nerin) of Jiangxi, China, with the basic engineering contract for the planned, direct-to-blister flash smelter at the Kamoa-Kakula Copper Complex that will incorporate leading-edge technology supplied by Metso Outotec of Espoo, Finland, and have a nameplate capacity of 500,000 tonnes a year of approximately 99%-pure blister copper.

The contract was signed earlier today by Mark Farren, CEO of Kamoa Copper, and Wu Runhua, General Manager of Nerin, at a virtual ceremony held at the Kamoa-Kakula Mine and Nanchang City.Jinghe Chen, Chairman of Zijin Mining; Zhang Xiaobo, Chairman of Nerin; along with Mr. Friedland and Mr. Sun, joined the signing ceremony to offer their congratulations and support for this important project milestone.

The planned Kamoa-Kakula smelter is to be built adjacent to the Phase 1 and Phase 2 concentrator plants, and is designed to use technology supplied by Metso Outotec and to meet the International Finance Corporation’s (IFC) emissions standards. The smelter has been sized to process the majority of the copper concentrate forecast to be produced by Kamoa-Kakula’s Phase 1, Phase 2 and Phase 3 concentrators. With a nameplate capacity of 500,000 tonnes per annum of blister copper, it is projected to be one of the largest, single-line blister-copper flash smelters in the world, and the largest in Africa.

Nerin is an international engineering company with more than 60 years of experience in smelter engineering and construction projects globally. Nerin actively promotes the advancement of smelting technology through its own research and development, and establishing various partnerships with global industry peers, including Metso Outotec.

Since its inception in 1957, Nerin has undertaken more than 4,000 engineering and construction projects in 60 countries, including numerous large-scale, flash smelting projects, which comprise approximately 47% of the world’s current flash-smelting capacity. Notable projects include the upgrading of Rio Tinto’s Kennecott smelter inSalt Lake City, Utah, United States, and the upgrading and expansion of Glencore’s PASAR smelter and refinery in Isabel, Leyte Philippines. Nerin’s exceptional capabilities in flash-smelting technology, combined with its significant experience in the DRC (including the Lualaba Copper Smelter near Kolwezi that is treating approximately one-third of Kamoa-Kakula’s current concentrate output, and Tenke Fungurume’s copper hydrometallurgical plant) will help ensure a smooth execution of the planned smelter at Kamoa-Kakula.

The smelter is expected to be built concurrently with the project’s Phase 3 mine and concentrator expansion, and the upgrading of turbine 5 at the Inga II hydropower complex. The additional 162 megawatts of renewable electricity from the Inga II upgrading project will be needed to power the Phase 3 expansion and on-site smelter.

The next stages in the smelter project development will be the completion of basic engineering, which is expected to take approximately seven months, and the ordering of the long-lead equipment, followed by earthworks which are expected to commence in Q2 2022. The awarding of the Engineering, Procurement and Construction Management (EPCM) contract is expected to occur shortly after the commencement of the earthworks.

The overall execution timeline will be dictated by the basic engineering, but is expected to be approximately three years. The expected capital cost is in the region of US$700 million (100%-basis) for the enlarged smelter, to be financed with cash flows from Kamoa-Kakula.

An onsite smelting facility has compelling cost and environmental benefits, including a reduction in the volume of copper concentrate shipped from the mine by approximately one half or more, and the associated logistics costs, export taxes and concentrate treatment charges. The smelter also will produce sulphuric acid as a by-product, creating a new revenue stream for Kamoa Copper.

There is a strong demand and market for sulphuric acid in the DRC to recover copper from oxide ores. Copper mines in the DRC currently import significant volumes of sulphur used in sulphur-burning acid plants to produce sulphuric acid for the treatment of oxide copper ores. The DRC also imports sulphuric acid, primarily from Zambia.

Mark Farren commented: “Today’s signing of the smelter basic engineering contract with Nerin highlights our commitment to the people of the DRC toderive more economic benefits from Kamoa-Kakula by maximizing in-country beneficiation. Achieving the transformative potential of Kamoa-Kakula’s unrivaled copper resources requires creative thinking that supports the DRC’s priorities of economic growth and diversification through value-addition, processing and beneficiation.

“Nerin is a highly-respected engineering firm with the people and in-country expertise to deliver a first-rate, on-site smelter that will be among the largest of its kind in the world. They successfully built the local Lualaba Copper Smelter, to which we are sending about a third of our current concentrate output.

“After a great deal of due diligence, the partners at Kamoa Copper collectively agree that the state-of-the-art, environmentally-friendly technology offered by the Metso Outotec direct-to-blister smelter best suits the unique low-iron, low-sulphur and ultra-high-grade concentrate produced at Kamoa-Kakula, and aligns seamlessly with our goal of producing the world’s ‘greenest copper’.

“The Kamoa-Kakula smelter will be powered by clean, renewable hydropower and will incorporate leading-edge sulphur capture. Shipping 99%-pure blister copper ingots produced from an on-site smelter, instead of shipping copper concentrate, will result in a significant reduction in Kamoa-Kakula’s concentrate transportation costs and Scope 3 emissions.”

Approximately one-half of the world’s primary copper currently is produced using flash, direct-to-blister smelting technology. Metso Outotec recently signed a major engineering and technology contract for the delivery of a landmark copper smelter complex to be built in Gresik, East Java, Indonesia. The project owner is PT Freeport Indonesia and has a value of EUR 360 million (US$424 million).

The Outotec technology produces high-quality blister copper in a single flash furnace without the need for separate converting stages or ladle transportation. The process and equipment have undergone continuous development over the last 70 years, which has led to one of the safest, most environmentally-friendly, and most reliable smelting processes for treating high-grade copper concentrates.

Kakula is projected to be the world’s highest-grade major copper mine, with an initial mining rate of 3.8 million tonnes per annum (Mtpa) at an estimated, average feed grade of more than 6.0% copper over the first five years of operations, and 5.9% copper over the initial 10 years of operations. Phase 1 is expected to produce approximately 200,000 tonnes of copper per year, while the Phase 2 expansion is forecast to increase production to approximately 400,000 tonnes of copper annually. Kamoa Copper is on track to complete the Phase 2 expansion in Q2 2022.

Based on independent benchmarking, the project’s phased expansion scenario to 19 Mtpa would position Kamoa-Kakula as the world’s second-largest copper mining complex, with peak annual copper production of more than 800,000 tonnes.

The Kamoa-Kakula Copper Project is a joint venture between Ivanhoe Mines (39.6%), Zijin Mining Group (39.6%), Crystal River Global Limited (0.8%) and the Government of the Democratic Republic of Congo (20%). A 2020 independent audit of Kamoa-Kakula’s greenhouse gas intensity metrics performed by Hatch Ltd. of Mississauga, Canada, confirmed that the project will be among the world’s lowest greenhouse gas emitters per unit of copper produced.