Under the agreement, Israel will get 600MW solar power from Jordan, while the latter will be supplied with up to 200 million cubic meters of desalinated water 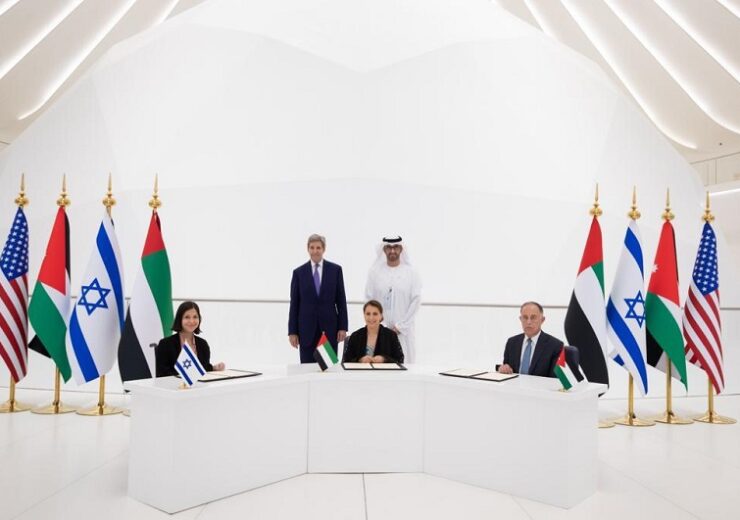 Signing of the declaration of intent by Jordan and Israel. (Credit: The Government of Israel)

Israel and Jordan have signed a co-operation agreement for developing 600MW solar photovoltaic plants and a water desalination project.

The projects are aimed at combating the threats of climate change to energy and water security in the region.

A declaration of intent in this regard was signed by Jordan’s Minister of Water and Irrigation Mohammad Al-Najjar and Israel’s Energy Minister Karine Elharrar. The agreement between the two countries was facilitated by the UAE and backed by the US.

Dubbed as Prosperity Green, the solar power plants involved in the agreement will be built in Jordan. The power produced by them will be supplied to Israel.

Israel has set a target of meeting 30% of its energy mix with renewable energy sources by the end of this decade. In the energy sector, the country’s aim is to achieve net zero carbon emissions by 2050.

The water desalination project, which has been named Prosperity Blue, will be built in Israel to supply up to 200 million cubic meters of desalinated water to Jordan.

Elharrar said: “Two countries with different needs, different capabilities, with each helping the other meet their challenges in a cleaner, greener, and more efficient manner.

“Jordan has an abundance of territory and sunshine which is perfect for solar panel fields, good for energy solutions and storage, and Israel has desalinisation plants that can help Jordan with its water scarcity.”

Considered to be the world’s second most water-scarce country, Jordan has annual renewable water resources of only 80m3 per person. The figure is considerably under the 500m3 per person threshold that defines severe scarcity of water.

Al-Najjar said: “Climate change and the influx of refugees have further exacerbated Jordan’s water challenges, however, there are many opportunities for regional cooperation to help increase sustainability in the sector.

“Water desalination is an important component of our overall strategy for the water sector’s sustainability, and we are continuously looking at different ways to help increase water supply, such as receiving up to 200 million cubic meters of desalinated water as part of this declaration.”

The Prosperity Green and Prosperity Blue projects are the two interdependent and contingent components of the declaration of intent. It has been signed more than a year after the US, Israeli, and UAE governments agreed to form a joint energy strategy.

Israel and Jordan are expected to begin feasibility studies for the projects in 2022.