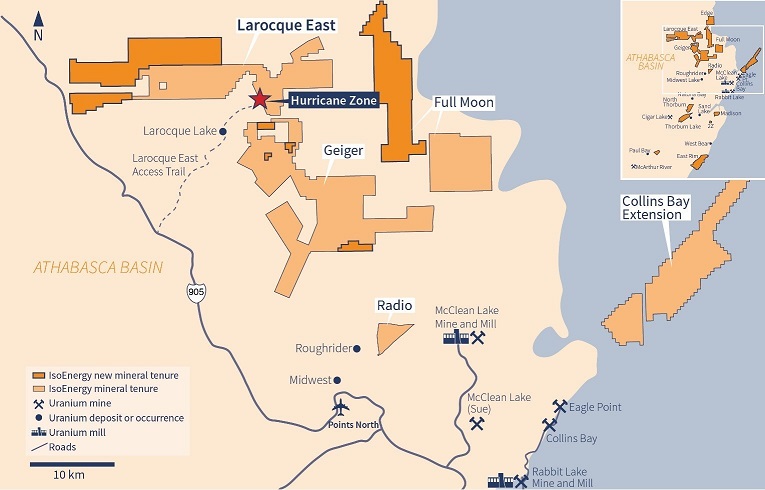 IsoEnergy has announced the acquisition of new uranium exploration claims in the prolific Eastern Athabasca Basin of Saskatchewan, Canada.

The company has acquired more than 46,000ha of claims that are divided amongst four properties.

With the addition of new claims, IsoEnergy now has 15 properties in the Eastern Athabasca Basin totaling 109,100ha.

One of the acquired claims include the 31,800ha Evergreen property located along the southeast rim of the Athabasca Basin, just 16km west of the Key Lake uranium mill.

The other acquisitions are extensions to three other uranium exploration properties.

The uranium exploration and development company owns 100% of all the new claims.

IsoEnergy exploration vice president Steve Blower: “I’m very pleased with the results of our recent staking efforts, particularly with the acquisition of the Evergreen property.

“In Evergreen we acquired a contiguous package of over 31,000ha along the basin margin close to the Key Lake mill.

“Several conductive zones are present that warrant exploration attention, especially given the presence of uranium bearing boulders and a paucity of drilling on the property.”

Details of the new uranium claims acquired by IsoEnergy

The acquired Evergreen property consists of 13 claims and only nine historical drill holes have ever been completed at the property.

IsoEnergy has also acquired a total of 6,900ha of new claims along the northwestern extension of the Larocque East property, home of the Hurricane zone.

Recently, the company discovered the high-grade Hurricane Zone of uranium mineralization on its 100% owned Larocque East property in the Eastern Athabasca Basin.

The company has added a total of 6,200ha to the Full Moon property, where sandstone cover is expected to be less than 150m thick.