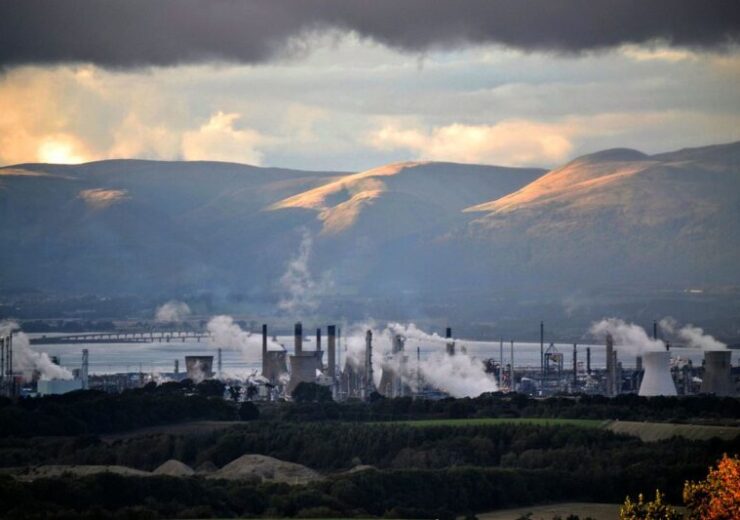 The Grangemouth refinery as viewed from the Bathgate Hills. (Credit: John/Wikipedia.org)

Ineos has announced plans to invest more than £1bn in its Grangemouth refinery in Scotland, as part of its efforts to achieve net zero emissions by 2045.

The investment will build on the 37% reduction achieved in net CO2 emissions at the site, which was acquired by Ineos in 2005.

The British chemicals company had previously committed to spend more than £500m on projects that are approved and currently being executed at the crude oil refinery.

The company has invested in a new energy plant, which is slated to be completed in late 2023. The plant will supply energy to all the site operations and will help offset at least 150,000 tonnes of CO2 emissions per annum.

Ineos said that the latest announcement will facilitate the next phase of the refinery’s transition to net zero.

The Grangemouth refinery is operated by Petroineos, which is a joint venture created by Ineos with PetroChina in 2011.

Ineos has laid a road map to achieve a reduction of more than 60% in greenhouse gas emissions from the refinery by the end of this decade. This is planned to be achieved by the company by making a series of investments, undertaking partnerships, and implementing innovative engineering.

The road map calls for the use of hydrogen by all businesses at the Grangemouth refinery. This will be accompanied by carbon capture and storage of at least one million tonnes per annum of CO2 by 2030, said Ineos.

Ineos said that further contributions to reducing emissions will be made through more investments in energy reduction and optimisation apart from electrification of key equipment.

Ineos O&P UK CEO Stuart Collings said: “Our challenge is to deliver a Road Map which ensures a Just Transition to Net Zero. This can only be achieved if we remain globally competitive and we stay ahead of evolving regulations and legislation.

“Hydrogen will play a very important role in the decarbonisation of our manufacturing plants.

“Building the infrastructure for large scale utilisation of hydrogen creates a foundation to achieve net zero by 2045 and enables wider use of hydrogen by Ineos and others in and around Grangemouth.”

The Grangemouth refinery has a production capacity of nearly nine million litres of fuels per day and one million tonnes of petrochemicals per annum.