In drought-stricken Namibia, solar energy is now used to make clean water from the Atlantic Ocean

The sustainable seawater desalination plant was inaugurated by Sam S Nujoma, founding President of the Republic of Namibia, at the University of Namibia campus. 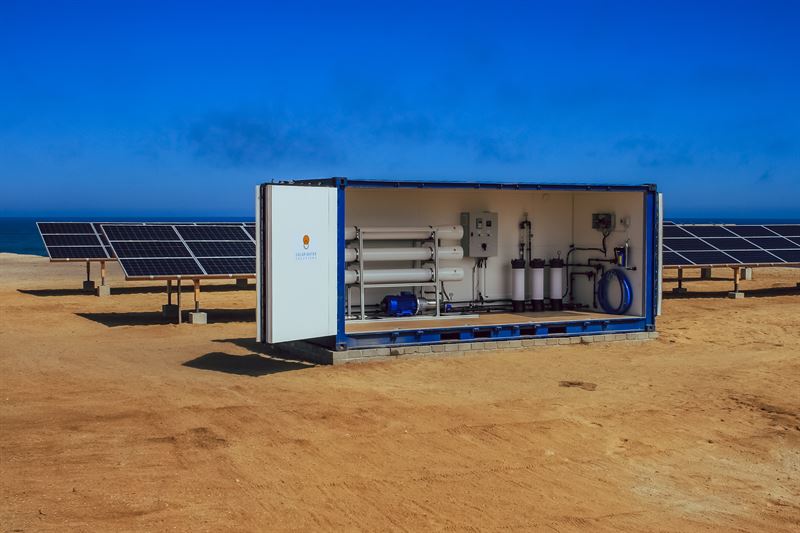 Image: Namibia’s first ever fully solar-powered desalination system has been commissioned as a joint initiative of the University of Namibia and the University of Turku in Finland. Photo courtesy of Solar Water Solutions.

In sub-Saharan Africa, Namibia stands out as the driest country and one of those hardest hit by the effects of climate change.

Namibia’s first ever fully solar-powered desalination system, which makes high-quality water straight from the ocean, has been commissioned as a joint initiative of the University of Namibia and the University of Turku in Finland. The plant is part of innovative research that examines the potential of coastal agriculture and plants and crops for effective carbon binding.

“The impact we hope to receive through this plant is to contribute to food security and increase energy supply while simultaneously combating and mitigating the effects of climate change. We can make Namibia green,” stated the Vice-Chancellor Professor Kenneth Matengu from UNAM.

The system is designed and delivered by a Finnish water technology company called Solar Water Solutions. It is among the first desalination systems in the world to operate on 100% renewable energy.

The new plant produces safe water for drinking and irrigation purposes. The decentralized system is situated close to the beach and installed in a container. The modular and scalable system produces 3.500 liters of water per hour from the ocean with zero energy costs and without any batteries. The system can also be used as a hybrid with electricity or a generator if needed. The equipment removes salt, bacteria, chemicals, viruses and other impurities from the water. Using boreholes that only produce saline or brackish water, the system can desalinate seawater for human consumption and for food security as well as animal consumption.

“The life-cycle costs of this solar-powered desalination solution are more than 70% lower than conventional systems, as there are no energy costs or need for fossil fuels,” says Antti Pohjola, CEO of Solar Water Solutions. Mr. Pohjola explains that decentralized solar-powered desalination systems could revolutionize water scarcity issues in off-grid islands and communities. Drinking and irrigation water can be produced locally in places where there is no community water infrastructure.