Imperial Mining Group has commenced its 2018 exploration program on its 100% owned Opawica Gold project located in the Abitibi region of northwestern Québec, Canada. 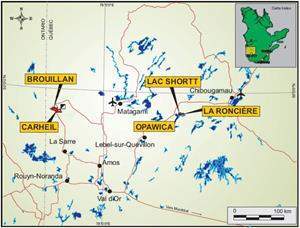 The shear zones are mineralized with quartz-carbonate-sulphide veins and veinlets containing strong gold and silver values with occasional visible gold (“VG”). Previous work on the property identified a 350 m long gold-bearing zone in the central part of the property which was never drill-tested below the 150 m vertical level.

There has been very little exploration drilling west of this gold zone and the host shear zone structure is open at depth and along strike to the west for at least 1.5 km.

The summer work program will involve geological and geophysical surveys to define targets for a winter drilling program.

Imperial president & CEO Peter Cashin said: “The Opawica project offers Imperial and its shareholders an opportunity to evaluate the economic potential of a relatively unexplored gold property in rocks we believe to be the western extension of the Joe Mann Mine horizon in the Chibougamau gold-copper camp.

“The Joe Mann Mine produced nearly one million ounces of gold and byproduct copper since the 1950s and returned some of the highest average gold grades of any mine on Quebec’s side of the Abitibi Greenstone Belt.”

The Opawica gold property is located 20 km east of Desmaraisville and is accessible via Highway 113 from Val d’Or to Chibougamau, Quebec, and by a network of forestry roads.

The property lies within a major regional NE-SW deformation corridor that hosts several gold occurrences and some former gold producers, including the Joe Mann mine (historical past-production 4.8Mt @ 7.56 g/t Au) and the Bachelor Lake mine (historical past-production 870,000t @ 4.66 g/t Au) located 90km to the east and 20km to the west, respectively.

The property straddles a major geological contact between the mafic volcanic rocks of the Obatogamau Formation and the felsic volcanic rocks of the Wachigabau Member. This contact is host to a 75-100 m wide deformation corridor consisting of several shear zones with strong, pervasive carbonate, sericite, and fuchsite alteration with disseminated pyrite and several quartz veinlets with gold and silver mineralization and occasional visible gold (VG).

Crews have been mobilized to the property and this work is anticipated to be completed by September 2018. Diamond drilling of the best targets identified by the program is planned for the late fall or winter period.