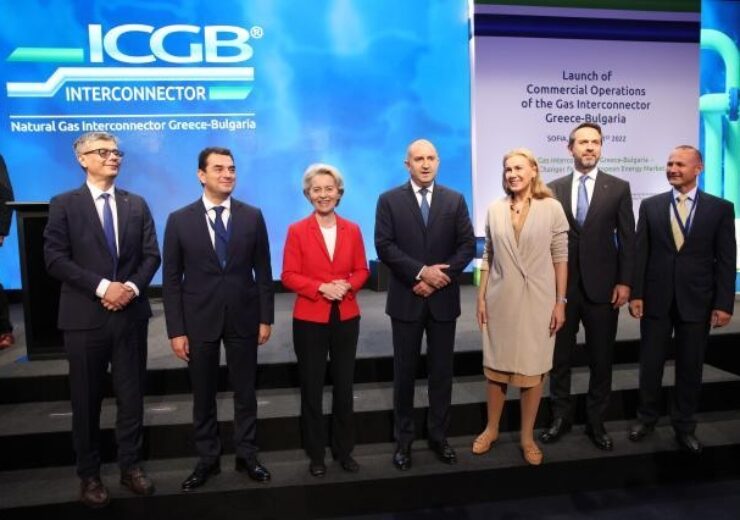 The IGB pipeline project was inaugurated at a ceremony in Sofia, Bulgaria. (Credit: European Commission)

The IGB pipeline was developed by IGI Poseidon, a joint venture of Edison and DEPA International Project, in partnership with Bulgarian Energy. It will be able to transport three to five billion cubic meters of gas from Q4.

The gas will be supplied from the southern corridor that covers the Caspian Sea, LNG from Greek terminals, and East Mediterranean, connecting Greece to Bulgaria and the whole of South-Eastern Europe via the Bulgarian network.

The total investment of nearly €250m for the IGB pipeline project was met through €45m financed by the European Energy Programme for Recovery (EEPR) and €39m funded by the European structural and investment funds. Contributions were also made by IGI Poseidon and Bulgarian Energy shareholders and a loan of €110m from the European Investment Bank (EIB).

IGI Poseidon chairman Kostantinos Xifaras said: “We are proud that our Company, IGI Poseidon, is ready to contribute effectively to the security of supply in the South- East Europe, as the current and peculiar circumstances demonstrated the substantial need for diversification.

“The operation of the IGB Pipeline enhances the geopolitical position of Greece as well as strengthens EU’s energy market.”

The 32inch pipeline runs vertically from South to North, laid between Komotini in Greece and Bulgaria’s Stara Zagora. It spans 31km in Greece and 151km in Bulgaria.

The interconnection points in Bulgaria with the Bulgartrangaz network and in Greece with the Trans-Adriatic pipeline (TAP) and DESFA networks will provide technical assurance for the gas delivery through the IGB pipeline, said IGI Poseidon.

The European Commissioner of Energy Kadri Simson said: “The IGB can provide much-needed alternatives and flexibility for Bulgaria and the whole region. This new route will help to strengthen security of supply to the region, including the Western Balkans, Ukraine, and Moldova.”