Spanish energy giant Iberdrola has started the transfer of East Anglia One offshore wind farm’s substation Andalusia II, to the UK from Cádiz in Spain. 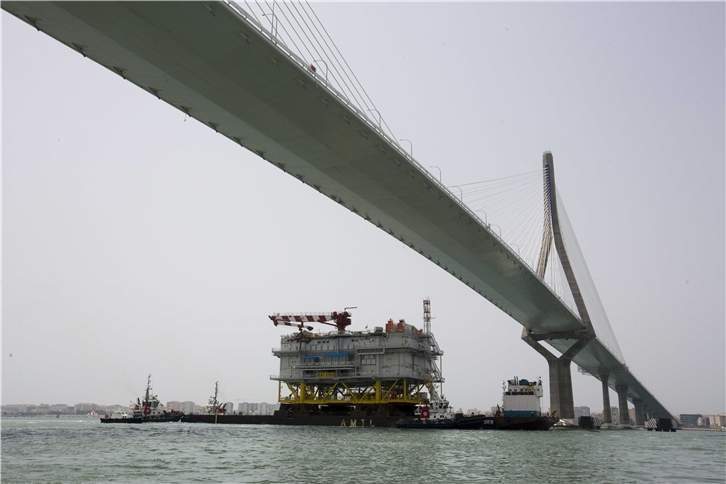 This substation is expected to be installed at the East Anglia One offshore wind farm by the end of August or the beginning of September.

Over the next few months, the remaining components of the wind farm will also be installed on site, including piles and jacket foundations and finally the wind turbines.

The 714MW East Anglia One offshore wind farm is expected to begin its operations in 2020 and it will generate enough clean energy to be supplied to nearly 600,000 British households.

The Andalusia II offshore substation, as per Iberdrola is the central nucleus of the wind farm, which is being built by the company. Its function is to collect the electricity generated from the wind turbines and transform it from the 66kV to 220kV. This electricity will subsequently be transmitted through the marine cable to the mainland, minimizing potency losses along the journey.

Iberdrola claims that the Andalusia II is the biggest AC offshore substation to be constructed in the world. It features new designs from Iberdrola, making it a compact structure, weighing nearly 3,900 metric tons.

Iberdrola was supported by Navantia and nearly thirty local auxiliary companies in the construction of the offshore wind farm’s substation.

The firm said: “Having pioneered the move into onshore wind-powered generation, Iberdrola has decided also to spearhead the development of the renewable energy source with the best growth prospects: offshore wind, in which it already has projects in operation.”

The East Anglia One offshore wind farm ill be located 50km from Lowestoft coast in Southern North Sea. It will consist of 102 turbines and each will be supported by a three-legged jacket foundation.