The agreement entails creating a platform to speed up the search for and development of renewable installations, including onshore and offshore wind and photovoltaic projects 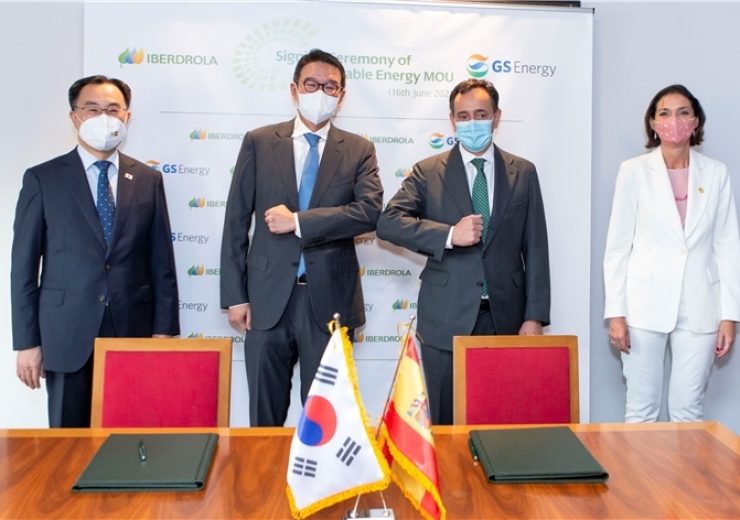 Iberdrola has ramped up its strategy to move into the renewables industry in the Asian Pacific region by signing a Memorandum of Understanding (MOU) with energy company GS Energy to cooperate on projects in South Korea and other Asian regions. The agreement was signed this morning against the backdrop of the Spain-Korea Business Summit, attended by Xabier Viteri, Director of Renewables at Iberdrola, and the CEO of GS Energy, Huh Yongsoo. The event was also attended by the South Korean Minister of Trade, Industry and Energy, Moon Sungwook and the Spanish Minister of Industry, Trade and Tourism, Reyes Maroto.

The alliance between the companies will enhance the capacity of two global leaders to seek out and develop more renewables projects, including onshore and offshore wind farms and photovoltaic plants.

Xabier Viteri, Iberdrola’s Director of Renewables, said: “The agreement is aligned with our diversification strategy and our objective to position ourselves in markets with high potential for growth in renewables. The alliance will enable us to harness the capacities of two global leaders and strengthen our determination to keep driving the energy transition based on competitive, zero-emissions technologies”.

GS Energy CEO, Huh Yongsoo, said “to make the energy transition toward renewable energy, it is inevitable we will adopt the best global practices. This agreement will allow us to combine Iberdrola’s execution and operating capacity with our development experience in Korea and the Asian Pacific so that everyone is a winner”.

EXPANSION AND LEADERSHIP IN RENEWABLES

The alliance strengthens Iberdrola’s expansion strategy in the Asian Pacific, its leadership in the sector and its pledge to establish itself as the world’s biggest renewables company.

The company is already operating in Japan and Australia. In 2020, Iberdrola moved into the Japanese market when it purchased local developer Acacia Renewables, with a 3,300 MW offshore wind portfolio in the south of the country.

Acacia Renewables is currently developing two offshore wind plants with a joint capacity of 1,200 MW, both of which will be operational by 2028. It has another four projects in the pipeline which will add a further 2,100 MW. These six projects will be developed by Iberdrola in collaboration with Macquarie’s Green Investment Group (GIG).

Its influence in the area was recently strengthened by a further agreement with Japanese company Cosmo Eco Power (the renewables affiliate of Cosmo Energy Holdings) to develop an offshore wind project with 600 MW.

In Australia, Iberdrola has become one the country’s main developers of renewables, after purchasing Infigen Energy last year. With this operation, the energy company now operates more than 800 MW of solar, wind and battery storage capacity. It is currently building more than 450 MW and has a portfolio of more than 1,000 MW in various stages of development.

In the meantime, GS Energy has 5,800 MW of installed capacity in energy projects. It operates 100 MW in the renewables sector and has a 900 MW portfolio.

Iberdrola has been a champion of the energy transition for more than two decades, and a key driving force in the push to transform industries, the green recovery of the economy and job creation.

With this objective, the company has launched a record investment plan worth 150 bn euros over the next decade – 75 bn euros by 2025 – with which it will triple its renewable capacity and double its grid assets, maximising opportunities in the energy revolution.

With an investment of 120 bn euros over the last ten years, Iberdrola is the leader in renewable energies with almost 35,000 MW of installed capacity, a volume that makes its generation fleet one of the cleanest in the energy sector. In fact, its renewables portfolio consists of 78,000 MW.

With emissions of 28 gCO2 / kWh, it is two thirds below the European average, and Iberdrola’s strategy of investing in clean energies and networks will enable the company to be “carbon neutral” in Europe by 2030.