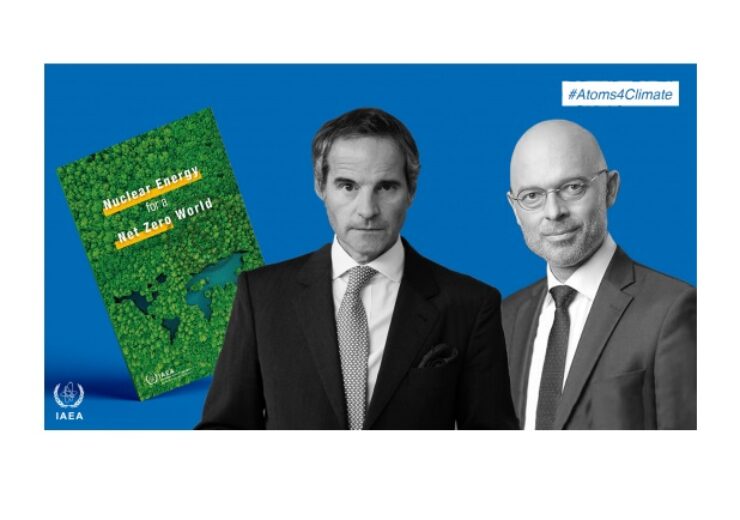 The ongoing energy crisis gripping Europe and other regions of the world further highlights the need for nuclear energy as the world works to meet climate change goals and transition out of fossil fuels. This was among the topics of a wide-ranging discussion today ahead of the COP26 climate summit between IAEA Director General Rafael Mariano Grossi and Polish Minister of Climate and Environment Michal Kurtyka.

“The energy landscape presents a number of uncertainties which are clear for all to see – uncertainties driven by market volatility, but also the ambitious goals we need to adopt given the other climate change crisis which is affecting us all,” Mr Grossi said in the online conversation, which came as the IAEA published its new report Nuclear Energy for a Net Zero World. “There is a clear and increasing recognition that we are faced with a combined set of challenges that requires we have all options available to deal successfully with this.”

As prices of natural gas skyrocket in Europe, Asia and some other regions, Mr Kurtyka said the world is entering an unprecedented energy crisis that “will certainly skew thinking among many countries right now that nuclear must be part of the solution and not be treated as an unwanted child.”

Poland, which generates 70% of its electricity from coal, has plans to build several nuclear power reactors to greatly reduce its reliance on the most carbon-intensive fossil fuel and meet climate goals, said Mr Kurtyka, who served as president of COP24 when Poland hosted the UN climate summit in 2018. Nuclear power emits almost no greenhouse gas emissions during operation and produces more than a quarter of the world’s clean electricity.

“Our nuclear programme foresees that between 6-9 GW of energy will be installed by 2043 in terms of nuclear, which means six reactors, and this will be playing an extremely important role in replacing the existing baseload capacities based on conventional fuels,” said the minister.

Poland has ambitious plans to use electricity from its future reactors as well as offshore wind farms to produce clean hydrogen. In addition, Mr Kurtyka said the country is working with Japan to look into the possibility of deploying high temperature gas cooled reactors (HTGRs), which can improve the efficiency and reduce the cost of producing hydrogen.

With the start of the COP26 in the United Kingdom just two weeks away, both men said they had high hopes that the world will use the event to raise its ambitions to meet climate goals. The IAEA will be hosting several events in Glasgow highlighting the role of nuclear energy and technology in mitigating and adapting to climate change.

Mr Grossi, who attended the previous UN Climate Change Conference in Madrid in 2019 as his first official trip as IAEA chief, said: “We now prepare to go to Glasgow, where the IAEA will showcase not only the importance of nuclear energy to get us to a net zero world, but also as a force for good in terms of the technologies, the science and the applications that will allow us to help on the adaptation needed in other sectors, like agricultural and getting food security in a world that is getting warmer.”