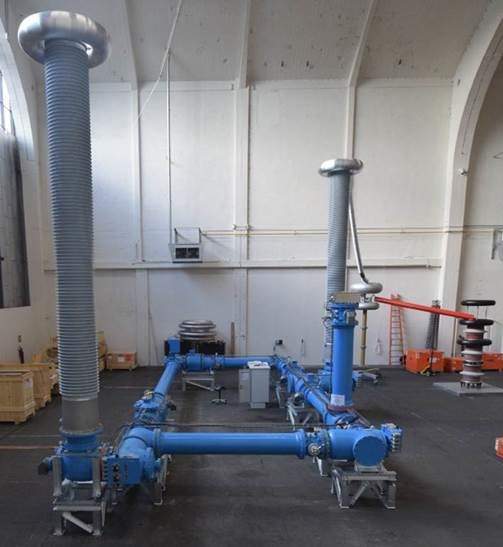 After several months of design, manufacturing, transport, assembly and pre-testing, this event marks an important milestone in the PROMOTioN project. This is the first time that such equipment will be tested in an independent commercial laboratory.

Later this year long term testing will commence to independently verify and demonstrate that this HVDC GIS technology is ready for real world application and achieve cost savings in future offshore HVDC converter stations and switchyards.

Switchgear is necessary to connect cables and lines to one another to form a power transmission network. They are important nodal points in modern power systems and are used both to de-energize equipment to allow work to be done and to reconfigure the network to improve performance and reliability.

The benefit of using gas insulated switchgear (GIS) over conventional air-insulated technology is a 70 – 95% reduction in required volume, realizing significant cost-savings in applications where space comes at a premium such as offshore or in urban environments.

HVDC GIS will play a key role in achieving the EU’s renewable energy and interconnection targets by enabling the cost-effective connection of remote offshore wind farms and submarine links.

Whereas gas-insulated technology for alternating current (AC) applications is mature, the application to HVDC is not. A lack of operational experience, standardised test programmes and commercially available products have hindered the uptake of the technology.

To increase trust and acceptance of HVDC GIS, DNV GL’s consultants and test engineers have worked closely with industry stakeholders to formulate a meaningful and comprehensive long-term prototype test programme which was confirmed during a workshop with 26 international experts.

“This enables HVDC GIS to make a significant increase on the technology readiness level ladder which is a necessary step towards solving the trilemma of a clean, affordable and reliable energy transition in Europe.”

The test programme will take over a year and, when finished, provide independently verified evidence of the maturity of the HVDC GIS technology, such that it can be considered a proven and accepted tool in TSO’s offshore HVDC grid planning toolbox.

The consortium consists of 33 partners ranging from all major European HVDC equipment manufacturers, TSOs and academia to test labs and consultants. This project has received funding from the European Union’s Horizon 2020 research and innovation programme under grant agreement No 691714.