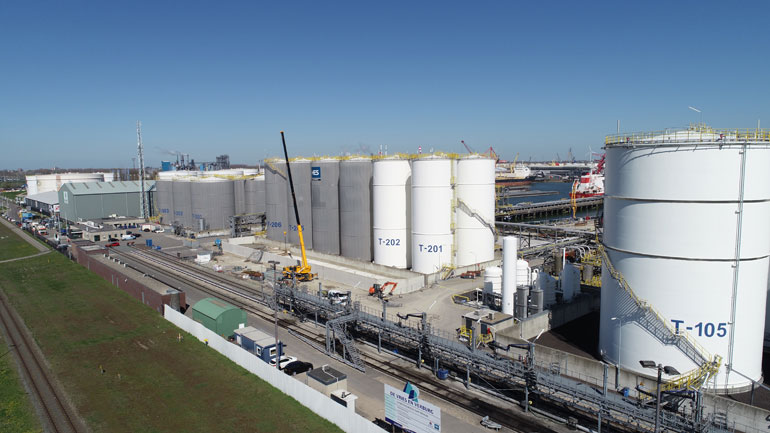 Presently, the first four tanks are being constructed in the conditioned production hall at the RDM site in Rotterdam and following their completion, construction of the last two tanks will begin. The completed tanks will then be transported by water and installed at HBTT in Botlek.

The tanks construction is part of the investment by HES Botlek in tank storage. The capacity was doubled to 490,000 m3 in 2017. The delivery of these six tanks increases the total storage capacity to 510,000 m3.

SJR Group owner Robert Sloot said: “Following the successful partnership in 2017, we have again gained the confidence of HBTT for this project. We are able to complete the construction entirely off-site for this expansion as well. This reduces inconvenience at the terminal as far as possible and enables us to construct and deliver high-quality tanks in a safe way.”

Along with selecting SJR Tank Construction for the project, HBTT has also selected De Vries en VerburgBouw for civil engineering works and the work is claimed to be in full flow.

HBTT general manager Charles Smissaert said: “The previous contract in 2017 was delivered entirely within budget and according to schedule. This meant that it was a logical step for us to award the contract for our terminal’s new expansion to SJR.

“The tanks will be used for the storage of biofuels. We are looking forward to the arrival of these tanks in August 2019, which will increase our storage capacity to 510,000 m3.”