Hannan Metals Limited ("Hannan" or the "Company") (TSXV: HAN) (OTCPK: HANNF) is pleased to announce it has further expanded the area under mineral claim application at the San Martin sediment-hosted copper-silver project in north-central Peru. 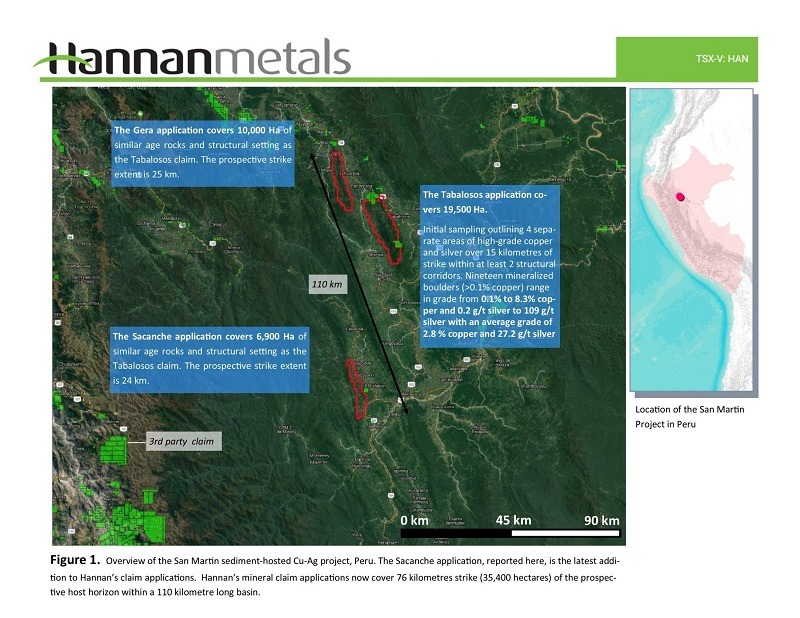 A district-scale sediment-hosted copper terrane is now secured, with applications covering more than 76 kilometres strike of the prospective host horizon.

Michael Hudson, Chairman and CEO states, “San Martin demonstrates the initial makings of a high-grade sediment-hosted copper and silver discovery in north-central Peru.  Hannan’s first mover position has allowed claiming of a district-scale sedimentary copper-silver target over 76 strike kilometres in length and we look forward to a multi-team exploration program during 2019 to target areas of grade and thickness.”

Hannan’s claim applications extend over a combined 76 kilometres of strike within a 110 kilometre basin scale trend. Early stage historic exploration at Sacanche identified both sediment-hosted copper and lead-zinc showings. Multiple gossans up 80 metres in thickness with anomalous zinc, lead and copper have been recorded over multiple kilometre strike. The thick lead-zinc gossans are interpreted to be developed at different stratigraphic positions than the interpreted location of the stratabound sedimentary-hosted copper-silver mineralized target zone. Scant historic sampling records grab samples from river float assaying significant copper and silver discovered intermittently along the 25 kilometre strike of the Sancache claim application area (Figure 2). Hannan interprets the separate copper and lead-zinc mineralized zones as products of an evolving basinal system, related to processes observed in other sedimentary-hosted copper districts where lead and zinc can be locally elevated.

The Sacanche claims are an extension of the sediment hosted copper-silver mineralized position discovered in Gera and Tabalosos claim applications where initial sampling by Hannan outlined four areas of high-grade copper and silver over 15 kilometres of strike within at least two structural corridors within the Tabalosos claim application area. Nineteen grab samples from mineralized float in river beds (>0.1% copper) ranged in grade from 0.1% to 8.3% copper and 0.2 g/t silver to 109 g/t silver with an average grade of 2.8% copper and 27.2 g/t silver.

Hannan has commenced the 2019 dry-season exploration program with field reconnaissance and plans to have a multi-team exploration program commence from mid to late April 2019. The areas under claim are sparsely populated. No indigenous land designation is recorded within Gera and Sacanche claim areas and only a small area (13%) of the Tabalosos application is defined as indigenous lands, which the Company views as a positive for future drill permitting. The Company has begun to identify and involve local stakeholder groups, and will continue to engage with communities and authorities during the 2019 field programs.

The San Martin project lies in the Sub-Andean zone of Andean Cordillera. Since the 1970’s the area has principally been explored for petroleum, delivering large seismic datasets similar to those being used by Hannan for targeting of zinc in Ireland. Seismically-defined basin structures and stratigraphy are now being interpreted in the context of sediment-hosted copper mineralization.

The Sub-Andean zone is underlain by a series of retro-arc foreland basins that were inverted during the Mid-Eocene and the Miocene. The inversion exposed a rift sequence initiated in the late Permian, composed of red beds and thick basin-wide evaporites. These rocks are contemporary to the Pucara and Mitu Groups in western Peru. The geological history shows a strong similarity to sedimentary basins which host giant sediment hosted copper deposits with respect to the stratigraphy, basin architecture, presence of thick evaporites and long periods of quiescence.

Copper and silver mineralization is hosted by the 150 Ma Saraquillo Formation, which was deposited in an intra-continental basin during the Jurassic-Early Cretaceous period. The Saraquillo Formation is 1.2-1.8 kilometres thick and extends for over 1,000 kilometres of strike. The Saraquillo Formation is spatially associated with salt domes which supports the seismic observations of widespread evaporitic strata, with several small artisanal salt and copper mines present in the area. Copper mineralization discovered to date is associated with the contact of fine-grained reduced carbonaceous sandstones with highly oxidized red beds of the Saraquillo Formation. Chalcocite is the dominant copper sulphide and it is always found together with carbonaceous material. Chalcocite occurs as fine disseminations, fracture filling and centimetre-sized massive aggregates. Secondary copper minerals are common on exposed surfaces. Albitization and silicification is associated with the mineralization, where the former dominates in more strongly mineralized samples.

Management of Hannan have had significant prior experience in Peru, which is the world’s second largest copper producer, with steady growth predicted over the coming years. The country’s copper output is forecast to increase from 2.5 million tonnes (“Mt”) in 2018 to 3.8Mt by 2027, averaging 4.7% annual growth. Sediment-hosted deposits are the world’s second-most important source of copper accounting for approximately 20% of world production.