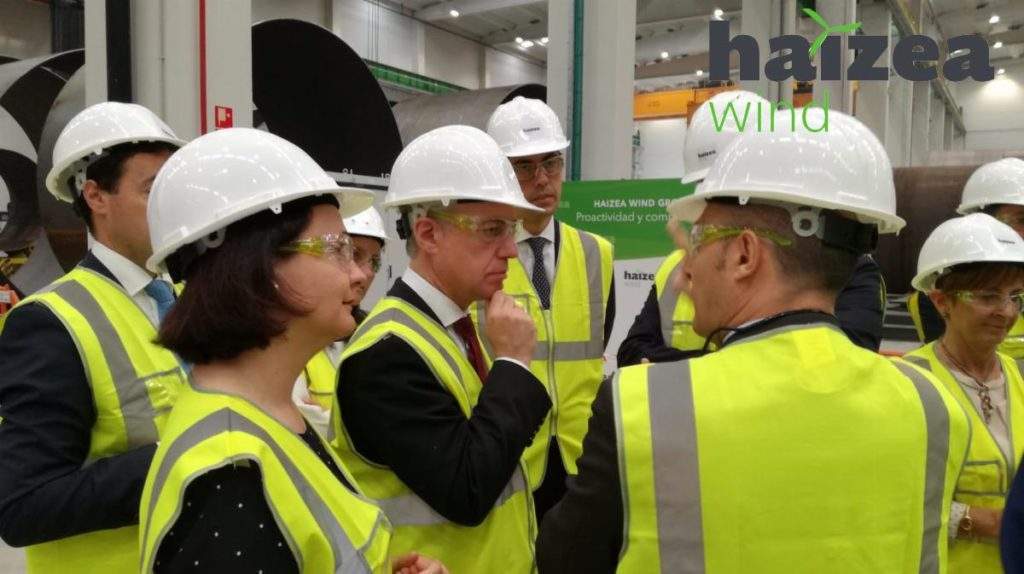 The total investment made between the construction of the building, its equipment and commissioning has exceeded 60 million euros.

This unique, state-of-the-art plant, has on the one hand, around 77,000 m2 on the AZ-2 quay of the Extension of the port, specifically in the Zierbena area, with direct access to the berthing line, which has a depth of 21 metres. These wide draughts and the proximity to the berthing line will allow to guarantee the most competitive entry and exit logistics without dimensional restrictions.

On the other hand, the facility itself is 500 metres long and is made of three bays, each 35 metres wide. It is also equipped with state-of-the-art machinery, which allows it to produce large, high quality pieces with the shortest lead times. The factory’s capabilities have been developed to cover the current and future dimensions of offshore towers and foundations.

In full production capacity, Haizea Wind can manufacture 300 sections of offshore towers per year of 50 meters long and up to 8.6 meters diameter and a plate thickness of 130 mm. These wind towers constitute one of the main elements of a wind power generator.

In addition, the plant will also manufacture other large parts used in offshore wind farms such as monopiles and transition pieces (TPs). It will produce 100 monopiles per year of 100 metres long and up to 10.5 metres of diameter.

The raw material used is carbon steel sheets, most of which is delivered from nearby steel mills; flanges, also made of steel, and internal electrical and mechanical components. Specifically, the plant is expected to use, among other raw materials, around 142,500 tons of thick steel sheets and 7,500 tons of flanges. In total, it will provide the port a traffic of nearly 150,000 tonnes/year when it is at full production capacity. In addition, beside contributing to tonnage handling, this project will provide added value due to its strategic quality both for the port and for the Basque Country.

Production has commenced with 86 employees, but it will have between 250 and 300 when it operates at full capacity.