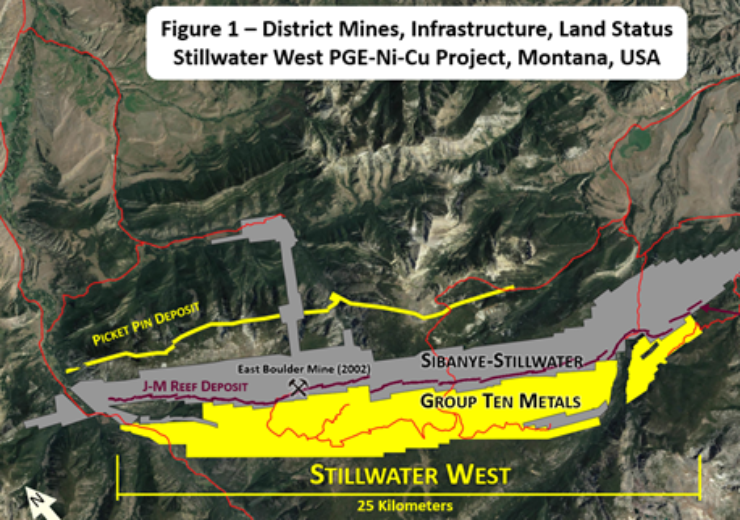 VANCOUVER, BC / ACCESSWIRE / June 22, 2020 / Group Ten Metals Inc. (TSX.V:PGE)(OTCQB:PGEZF)(FSE:5D32) (the “Company” or “Group Ten”) announces that it has satisfied all earn-in requirements set out in the agreement announced June 27, 2017 (the “Stillwater Agreement”) and now has 100% ownership of the Stillwater West property, subject to a 2% NSR royalty interest which includes a 1% buy-down provision. The Stillwater Agreement was amended prior to completion to include an updated area of interest clause to incorporate an expanded claim block, which has more than doubled since the acquisition date.

Group Ten President and CEO, Michael Rowley, stated, “We are very pleased to have completed the earn-in requirements at Stillwater West, securing an exceptional land package and strengthening our position beside Sibanye-Stillwater, the world’s largest platinum producer, in the productive and metal-rich Stillwater Igneous Complex. Our systematic approach to consolidating the district and compiling all available data resulted in the confirmation of Platreef-style nickel-copper sulphide mineralization, enriched in palladium, platinum, rhodium, cobalt, and gold, in our 2019 drill campaign, which returned some of the best mineralized intervals to date in the district on a grade-thickness basis. We are now advancing drill-defined mineralization towards delineation of formal resources in four of the five most advanced target areas as we continue to demonstrate the potential for much larger mineralized systems than have been recognized previously in the district. We look forward to providing further updates on that work, in addition to announcing our 2020 exploration plans, in the near future.”

With respect to Group Ten’s other projects, the Company is currently soliciting and reviewing expressions of interest on its non-core assets (all of which are 100%-owned) as part of its focus on Stillwater West.

Summaries of all assets presently in Group Ten are provided below:

100% owned, subject to a 2% NSR royalty interest, which includes a buy-down provision to 1%;
At 54 square kilometers, Stillwater West establishes Group Ten with the second largest land position in the western hemisphere’s most valued and productive palladium and platinum district, sharing the Stillwater Igneous Complex with Sibanye-Stillwater’s three producing mines, 60km from a world-class metallurgical complex;
The district is known for the size and grade of its palladium-platinum mines, which are the highest grade in the world and the largest outside of Africa and Russia, yet remains surprisingly underexplored overall;
Group Ten is the first to systematically explore for Platreef-style mineralization, targeting bulk tonnage PGE-Ni-Cu mineralization in the lower Stillwater complex based on known similarities with South Africa’s Platreef district. The north limb of the Bushveld complex, or Platreef, is host to some of the largest, most profitable, and longest-lived nickel-copper sulphide hosted PGE mines in the world, including Anglo American’s Mogalakwena mine, and Ivanhoe’s Platreef mine;
The Company also has target areas focused on more conventional reef-type mineralization;
Group Ten’s 2019 drill program returned some of the longest mineralized intercepts ever reported in the district, confirming the presence of “Platreef-style” mineralization in key target areas, and enabling 3D block modeling of drill-defined mineralization in four target areas which are now being advanced to maiden resources; and
In addition to the palladium, platinum, nickel, copper, and cobalt mineralization demonstrated to date, recent work has expanded the understanding and potential for high-grade gold and rhodium at Stillwater West.
Black Lake – Drayton Gold Project, Northwest Ontario, Canada
District-scale high-grade gold project adjoining Treasury Metals, Northwest Ontario

100% owned, subject to only standard royalties on certain claim blocks, all of which have buy-down provisions;
137 square kilometer land position adjoining Treasury Metals’ recently consolidated high-grade gold Goliath-Goldlund project, in the Rainy River district of Northwest Ontario;
Substantial database with more than 20 historic mineral occurrences, multiple high-grade bulk samples, and over 127 drill holes, in addition to geological, geochemical and geophysical data;
43% of past drill holes intercepted gold or copper mineralization, however past work did not adequately test the mineralized zones which are now better understood in the area; and
Much of the project’s more than 30 km of strike length remains untested, despite the success of neighboring deposits and the broader Abrams‐Minnitaki Lake archean greenstone belt, which now hosts more than 10 million ounces gold.
Kluane PGE-Ni-Cu Project, Southwest Yukon, Canada
District-scale asset adjoining one of largest undeveloped PGE-Ni-Cu deposits in the world

100% owned, subject to only standard royalties on certain claim blocks, all of which have buy-down provisions; and
At 255 square kilometers, Group Ten’s Kluane PGE-Ni-Cu project is the largest land position in the Kluane Ultramafic Belt, a mafic-ultramafic system that extends from northern British Columbia through the Yukon to central Alaska and hosts multiple PGE-Ni-Cu deposits, including the Nickel Shäw project now being advanced by Nickel Creek Platinum Corp.
Yankee-Dundee Project, Southeast BC, Canada
Royalty payments plus back-in rights at a past-producing Au-Ag-Pb-Zn mine

Group Ten may receive up to $4 million or more by way of cash and royalty payments, depending on mine performance, commodity markets, and other factors, subject to specified production milestones as defined by a 2013 sale agreement on the past-producing Yankee-Dundee gold-silver-lead-zinc mine in Southeast British Columbia; and
The Company maintains a back-in right on the project in the event that certain milestones are not met.