The Southern Star Property is located 6.5km south of the Fenelon/Tabasco deposit 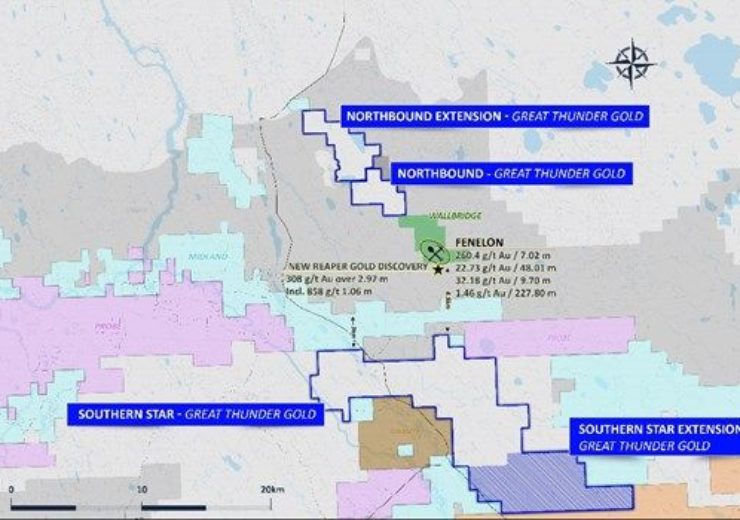 Great Thunder’s CEO, Rich Macey, stated, “Our team has been very active in recent months consolidating ground in the Fenelon Gold camp. This success is attributable to the team’s extensive network and knowledge of the areas on which to concentrate. Because of this timely acquisition, we have been able to scale up our geophysical survey to cover the entirety of our projects within the camp.”

The expanded Southern Star Property comprises 222 claims covering approximately 123 square kilometres. It is bounded to the south by Glencore claims and to the west and east by the claims of Midland Exploration.

Great Thunder previously announced it will conduct a helicopter-borne magnetic and electromagnetic survey over its nearby Northbound property. The Company has now contracted Prospectair Geosurveys Inc., an industry leader in airborne geophysical exploration, to also conduct geophysical surveys consisting of approximately 1,500 line-kilometres over the expanded Southern Star Property. The surveys will be conducted concurrently and Prospectair’s mobilization is imminent.

Geologically, the Southern Star Property is underlain by volcanic intermediate to mafic rocks and mafic intrusive (gabbro). As interpreted by historical magnetic surveys, the gabbros have the form of a fold nose in the volcanics. Sediments and felsic intrusives are also present, but to a minor extend. Until now, only 5 drill holes have been reported on the property. Several isolated MegaTem anomalies were located during a Quebec government survey done in 2008, though many of them have not been drilled.