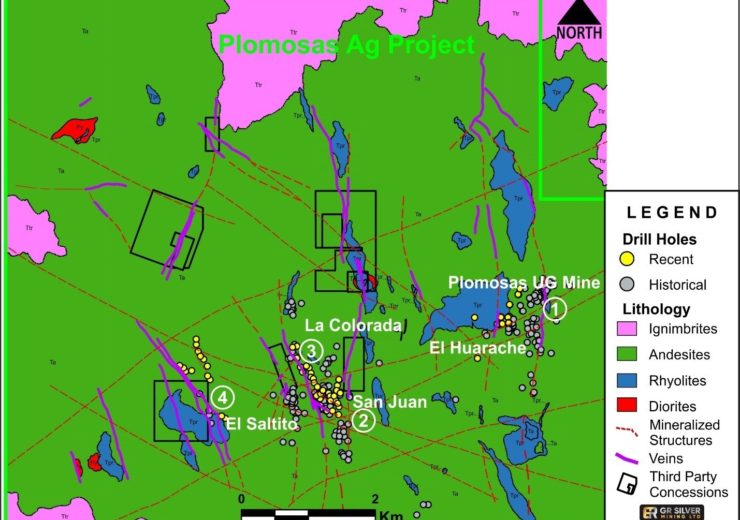 The Plomosas project has significant exploration potential for the development of mineral resources from existing inventories, along with new discoveries in 2020.

GR Silver Mining president and CEO Marcio Fonseca said: “The signing of the definitive share purchase agreement, and the ultimate acquisition of the Plomosas Project, together with the associated infrastructure and exploration database, will allow the Company to advance hunt for additional high-grade silver and gold resources in 2020.

“The incorporation of this Project’s extensive database, together with knowledge gained during the last two years exploring, drilling, and expanding the resource at the nearby San Marcial Project, provides superb vectors  to achieve new discoveries of high-grade deposits on the Plomosas Project.”

Once the transaction is closed, the company will own 100% of the Plomosas silver project, a portfolio of five shallow past producing underground mines.

The project is located within 5km from the company’s San Marcial Project in the Rosario Mining District, Sinaloa, Mexico. The past producing mines at the project includes the Plomosas-La Cruz mine, San Juan mine, La Colorada mine, El Huarache mine, and El Saltito mine.

Plomosas holds 8,515ha of mining concessions, valid up to the year 2058, and is equipped with key facilities and infrastructure.

The transaction is expected to be closed within the next 30 days, subject to customary conditions including approval by the TSX Venture Exchange, said the company.

Fonseca added: “By controlling 100% of a large concession portfolio in the eastern portion of the Rosario Mining District, I believe GR Silver will own the most attractive mineralized prospects in a favorable geological setting similar to other multi-million-ounce mining districts along the western border of the Sierra Madre Occidental in Mexico.

“This increases the likelihood of new discoveries of high-grade Ag and Au deposits at both the San Marcial and Plomosas Projects and consolidates the ownership of advanced stage projects in the region into a single company – GR Silver Mining.”