After the completion of the entire project, the 1305km link will be able to transmit nearly 6GW of electricity at 800kV 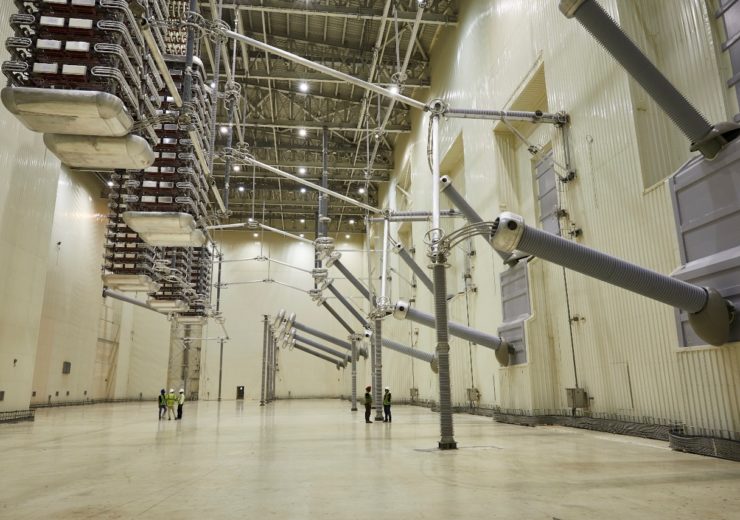 Image: Inside the Valve Hall of the Champa-Kurukshetra HVDC Converter Station. Photo: Courtesy of Business Wire.

GE’s Grid Solutions business has energised another 1.5GW of capacity on the Champa-Kurukshetra ultra-high-voltage direct current (UHVDC) project in India.

With the energisation of the third of four poles planned for the Champa-Kurukshetra UHVDC project now complete, the 1305km transmission link is capable of transmitting 4.5GW of electricity.

The ±800 kV UHVDC transmission line is considered to be a crucial component of the Indian government’s electricity-for-all initiative. The project will enable transmitting electricity from power generating plants located across the state of Chhattisgarh to a GE-built rectifier station in Champa, where the electricity in alternating current (AC) is converted to direct current (DC).

Phase 1 of the project was completed in 2017, providing 3GW of transmission capacity. Once the fourth pole is commissioned, the entire system will be able to transmit 6GW of electricity.

The electricity is transmitted in bulk across the UHVDC line and is then converted back to AC by a GE inverter station in Kurukshetra, Haryana. From here, the power is further transmitted to surrounding states which are in need of electricity.

The project is being executed by GE T&D India, the listed entity of GE’s Grid Solutions business in India.

GE Grid Solutions grid integrated solutions head Rajendra Iyer said: “Thanks to this latest milestone in the GE Champa-Kurukshetra project, India is now transmitting more electricity over this link than any other DC link in India, helping to resolve the supply shortfalls in the north.

“This project also includes an integration where two separately designed bi-poles are running in parallel operation over the same DC transmission line, a design feature only seen on two other HVDC projects in the world, both of which the company was involved with, a great compliment to our legacy and current HVDC controls capability.

“On behalf of everyone at GE’s Grid Solutions, I would like to thank our teams in India and our UK HVDC center of excellence for this remarkable feat.”