A working meeting between Alexey Miller, Chairman of the Gazprom Management Committee, and Rainer Seele, Chairman of the Executive Board of OMV, took place at the Arctic: Territory of Dialogue 5th International Arctic Forum in St. Petersburg. 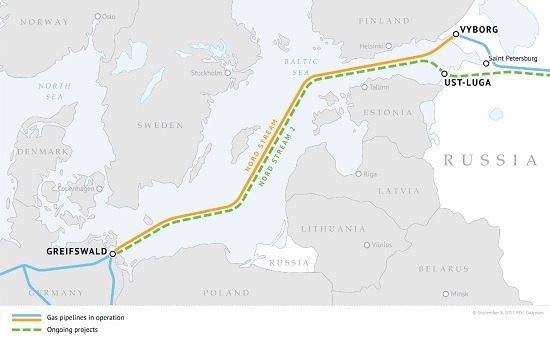 The parties discussed key areas of cooperation between the companies, including gas supplies and the ongoing construction of the Nord Stream 2 gas pipeline. As of today, 986 kilometers of pipes – more than 40 per cent of the combined length of the gas pipeline’s two strings – have been laid in the Baltic Sea.

Particular attention was paid to further steps in the development of the bilateral strategic partnership.

In June 2018, an Agreement was signed to extend until 2040 the existing contract between Gazprom Export and OMV Gas Marketing & Trading GmbH for Russian gas supplies to Austria.

In October 2018, Gazprom and OMV signed the Memorandum on Strategic Cooperation.

Also in October 2018, Gazprom and OMV inked the Basic Agreement on Asset Sale. In accordance with the document, OMV would obtain a 24.98 per cent stake in the project for developing Blocks 4A and 5A in the Achimov formations of the Urengoyskoye field.

Nord Stream 2 is the construction project for a gas pipeline with the annual capacity of 55 billion cubic meters from Russia to Germany across the Baltic Sea.