Fremont has permitted 20 drill sites at Griffon, 10 of which have been selected for drilling in the 2,000 metre Phase 1 drill programme 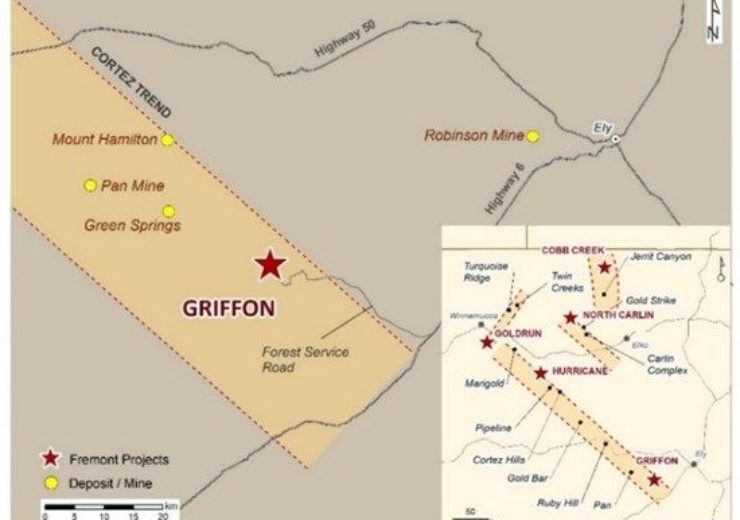 Fremont Gold announced that drilling has commenced at the past producing Griffon gold project (“Griffon”), located at the southern end of the Cortez Trend, Nevada (see Figure 1). The Cortez Trend is one of the most prolific gold trends in the world and is home to Nevada Gold Mines’ Cortez Mine (963,000 ounces gold produced in 2019).

Fremont has permitted 20 drill sites at Griffon, 10 of which have been selected for drilling in the 2,000 metre Phase 1 drill program. The 10 priority drill holes will test gold-in-soil anomalies, an area of unmined mineralization to the southwest of the Hammer Ridge pit, permissive stratigraphic targets, and the jasperoid-bearing Blackrock fault:

Hole DS-4 is targeting a never before drilled gold-in-soil anomaly located to the east of the Discovery pit;
Hole DS-6 has been sited between two historic drill holes that returned broad gold intercepts in the Joana Limestone. Importantly, hole DS-6 will be drilled deeper than the two historic holes in order to test the underlying Pilot Shale; and
Hole DS-18 and DS-20 will be drilled into a coincident gold and thallium soil anomaly hosted in the Chainman Formation that will also penetrate the Blackrock fault and the underlying Joana Limestone.
“Griffon is an underexplored Carlin-type gold system that hasn’t been drilled since the 1990s,” said Blaine Monaghan, CEO of Fremont. “Most of the historic drill holes were concentrated around the two pit areas and did not exceed 100 metres in depth. Recent exploration has identified many prospective targets, which leads us to believe that Griffon has excellent potential to host one or more large gold systems.”

Drill target notes
Thallium has been recognized as a commonly enriched element in alteration assemblages associated with Carlin-type gold deposits. Several planned drill sites at Griffon are located on coincident thallium and gold soil anomalies which form a NW-SE trend through the Discovery and Hammer Ridge pit areas.

The Pilot Shale is the main gold host at Fiore Gold’s Pan Mine and several deposits at Kinross Gold Corporation’s Bald Mountain Mine complex.

The Blackrock fault is a structural discontinuity marking the contact between the Joana Limestone and the overlying Chainman Formation. This contact is a major gold-bearing zone at Fiore Gold’s Gold Rock project. In addition, extensive jasperoid development exists along the Blackrock fault at Griffon (jasperoids are surface alteration features that can indicate the presence of precious metal mineralization at depth). This structural discontinuity was likely to have been a conduit for hydrothermal fluids, making the fault and the permeable units above and below it, prospective gold hosts.

Griffon gold project
Griffon is a past-producing gold mine located at the southern end of the Cortez Trend, approximately 75 km southwest of Ely, and is accessed via paved highway and Forest Service roads. Mineralization at Griffon is Carlin-type and is comparable to the mineralization found at several deposits at the Kinross Bald Mountain Mine complex (284koz Au 2018), approximately 70 km to the north.

Griffon was first drilled in 1988 and a limited amount of shallow pattern drilling (214 drill holes in total) focused on delineating the Discovery Ridge and Hammer Ridge deposits. From 1997-1999, Alta Gold Co. (“Alta”) produced ~60,000 ounces of gold from Discovery Ridge and Hammer Ridge in an oxide heap-leach operation. Alta reported a number of unmined drill intercepts to the southwest of Hammer Ridge, including drill hole GR97-175 which returned 57.9 metres at 0.86 g/t gold, and proposed expanding Hammer Ridge before operations ceased.

Griffon hosts numerous gravity, soil and stratigraphic drill targets. The Pilot Shale horizon – the primary gold host at Fiore Gold’s nearby Pan Mine – has not been adequately tested, and the Joana/Chainman transitional horizon, which hosts gold at Griffon, may be concealed underneath and within the Blackrock fault. Lastly, there is also potential in and around the pits, as demonstrated by drill hole GR97-175.