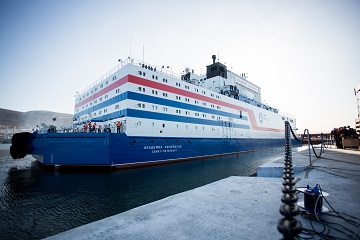 Built by Russian state corporation Rosatom through its electric power division Rosenergoatom, the Akademic Lomonosov FNPP docked at its permanent location in the Arctic port town of Pevek in September 2019.

“Today, it officially becomes the 11th nuclear power plant in Russia and the northernmost one in the world.”

Based on the inspection results, a “statement of conformity” has been issued to the FNPP validating its compliance with all project documentation requirements.

The Akademic Lomonosov FNPP, which was connected to the isolated Chaun-Bilibino electricity network in Pevek December 2019, had delivered 10GWh of electricity into the grid as of January 2020.

With an operational life of 40 years, the project the Akademik Lomonosov facility is expected to generate 50Gcal/hr of heat energy.

Power generated by Akademik Lomonosov NPP will be sufficient to supply for more than 100,000 households