Built on a massive scale, the new generation of wind turbines promises high yields. To process the energy harvested by the huge blades, manufacturers are increasingly turning to permanent magnet generators, reliable enough to function in treacherous offshore sites. Jean-Christophe Demard and Frederic Maenhaut of GE Power Conversion, which boasts the largest PMG currently installed offshore, speak to Sarah Williams about the developments. 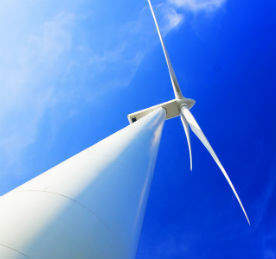 Each twirling blade the length of the Great Sphinx of Giza, Alstom’s Haliade 150-6MW is a towering example of the gigantean scale of the new generation of wind turbines. The enormous span of these 73.5m blades can harvest a huge amount of energy and perform even when winds are low. However, to create power efficiently, it needs a large generator with a high power output.

With longer blades comes a need for taller masts, and what’s more, these giant new turbines tend to be installed in remote offshore locations where conditions can be harsh and unpredictable. As a result, regular maintenance visits are not feasible and repairs costly, so it’s essential to safeguard the turbine from mechanical faults and minimise downtime.

To achieve this, manufacturers are increasingly turning to permanent magnet generators (PMGs), which provide greater mechanical reliability than those with gearboxes. Jean-Christophe Demard, technical director rotating machines – renewables at GE Power Conversion, outlines the many advantages of using a PMG.

"A PMG provides increased reliability because it has fewer components than the conventional solution, so maintenance is reduced," he says. "There is also no need for external energy to drive the rotor because the energy is coming from the permanent magnet as a rotor, so it is also more efficient. As a consequence, volume is reduced and the power density of the machine is much better than that of a conventional solution."

"Because the blades are larger than on other wind turbines, they rotate at a lower speed, and so there is a higher torque, which means they need a larger generator."

GE has been developing technology in this area for five years, and its latest offering, a 6MW direct-drive PMG, is one of the world’s largest wind generators installed and operated offshore today. The reason it needs to be so large is a simple matter of torque, Demard reveals.

"Because the blades are larger than on other wind turbines, they rotate at a lower speed, and so there is a higher torque, which means they need a larger generator," he says. "The diameter of the generator must increase directly in relation to the blade diameter and rotation speed."

For this reason, GE’s PMG is used in Alstom’s two prototype Haliade 150-6MW turbines with their 150m-diameter rotors: one at Le Carnet in France and one at the Belwind site at Ostend, just off the Belgian coast. The Belwind turbine, the largest offshore wind turbine ever installed in sea waters, will help to confirm how the machine performs in the environment for which it was designed.

Gone is the gearbox

One of the unique features of the new designs is that while conventional models have traditionally featured a gearbox coupled to the generator, the PMG does not require one at all.

"Not having a mechanical gearbox is a great help," Demard says. "This comes from the global system designed by Alstom, and the big advantage is that by removing it, you reduce the number of components or mechanical parts between the blade and the generator, and so you improve efficiency."

The high density of GE’s direct drive PMG allows a more compact, streamlined and lightweight design, but there is another advantage to removing the gearbox, Demard explains. "By taking it out completely, you also remove the opportunity for the gearbox to fail," he says. "This means the availability of the wind turbine is better and the energy yield is higher."

While the risk of malfunction may be reduced in the absence of a gearbox, other problems can, of course, arise, and the turbine needs to be able to continue to operate as and when they do. Just as regular service and maintenance is impossible in the treacherous offshore environment, it takes time before access can be arranged to carry out repair work. For this reason, the direct-drive PMG has been designed with a capability for high levels of redundancy, so that if one or two of the electric channels are failing for whatever reason, power can still be produced with the turbine running in a degraded mode.
"Because of extreme weather, waves and high wind speeds, it is very difficult to access the wind turbine in cases of problems or failure," Demard says. "So making it possible to operate even at reduced power allows it to continue functioning for however many days or weeks until access is authorised and repairs can be carried out. On top of that, our generator has been qualified from a corrosion point of view according to offshore standards to be resistant to the impact of salt-water corrosion."

Another advantage, Demard points out, is Alstom’s ‘pure-torque coupling’ concept. "The generator is designed only to transmit the torque and not to accept the actual load coming from the blade, and this helps a lot," he says.
A minimum air gap can be maintained between the generator rotor and the stator, offering high electrical efficiency and contributing to high yields.

Coupled with the 6MW-rated power turbine and its colossal blades, the GE direct-drive PMG helps the Haliade 150-6MW model to achieve an annual energy production 15% higher than the current generation of offshore turbines. One wind turbine running at 6MW will be capable of providing the equivalent of a year’s supply of energy for 5,000 households.

In years to come, yields could be even higher, with the technology set to improve further to meet growing demands, Demard says. "The direct drive is definitely the most suitable generator for the future, and with this in mind, we will continue to offer improved technology. Up to 10MW is certainly achievable; perhaps even a little more. To go beyond this, we will probably need a new kind of technology, such as superconductive machine technology. But this would need a lot of development for serial production, and we first need to convince the market of the reliability of our current technology."

"The direct drive is definitely the most suitable generator for the future, and with this in mind, we will continue to offer improved technology."

While increased power may be possible – and indeed desirable – in the future, for now, the focus is on perfecting the 6W technology and convincing the market of the benefits it offers. GE’s executive director of renewables, Frederic Maenhaut, attests to the continued and growing demand for the new turbines, and the direct-drive PMGs central to their design.

"We see more and more requests for goods and projects. Together with Alstom, we are ramping up and getting ready to deliver a significant volume on a yearly basis. Today, there is huge potential for offshore wind and for this technology.

"As we know, cost is key for this industry, and we are focusing on this to offer improved availability and reduced costs. While there will be an escalation to go to increased power in the future, the first concern is making sure it makes sense from a cost-of-energy standpoint. We already have 6MW, and with that we know we can make something really big."