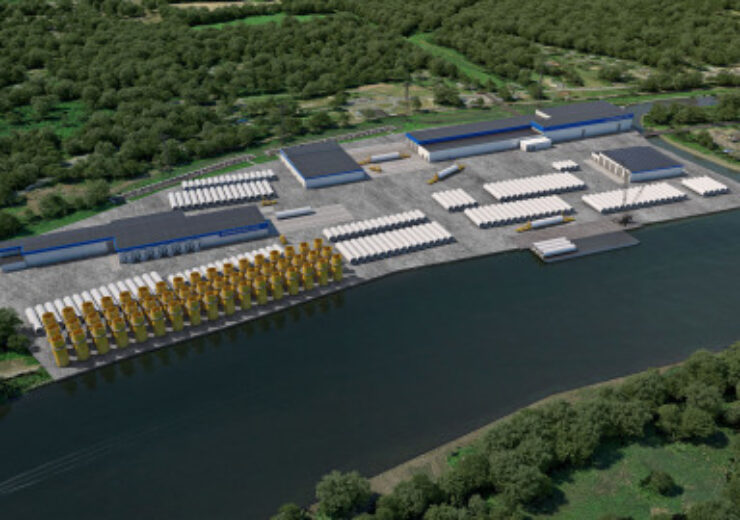 A rendition of the proposed site at the Port of Albany, in upstate New York (Credit: Business Wire)

Norwegian energy major Equinor is planning to build what it claims to be America’s first offshore wind tower manufacturing facility at the Port of Albany, in upstate New York, US.

Together with wind industry manufacturers Marmen and Welcon, Equinor intends to transform the port for manufacturing offshore wind towers and transition pieces (TPs).

Expected to create up to 350 jobs in the region, the Port of Albany extension project forms part of the Equinor’s bid, which was submitted in response to the latest offshore wind energy solicitation launched by New York State Energy Research and Development Authority (NYSERDA).

NYSERDA seeks up to 2.5GW of offshore wind capacity

The solicitation seeks up to 2.5GW of offshore wind and multi-port infrastructure investment plans (PIIPs).

The development of the tower manufacturing facility at the Port of Albany, however, is subject to selection of Equinor’s bid and PIIP by the NYSERDA.

Equinor Wind U.S. president Siri Espedal Kindem said: “With this latest solicitation, New York solidifies its commitment to renewable energy and its desire to make the offshore wind industry an important component of the state’s economy.

“Equinor is excited about the possibility of expanding its business within New York, and this plan would create the first facility for offshore wind tower and transition piece manufacturing in the U.S. Our proposal helps secure New York and the Port of Albany as a regional leader in this exciting new industry.”

Equinor said that the offshore wind tower and TP manufacturing facility at the Port of Albany is expected to provide an immediate economic boost while creating employment opportunities as early as the second half of 2021.

The Center for Economic Growth chief economic development officer Katie Newcombe said: “With the ongoing expansion of offshore wind power on the East coast, the Port of Albany would become a natural destination for future projects to source components.”

In September, Equinor has agreed to sell a 50% stake in two offshore developments to British oil and gas company BP for $1.1bn.

The stakes cover the Empire Wind project in the waters of New York State, and the Beacon Wind project off the cost of Massachusetts. The transaction is planned to be completed in early 2021.