Emerita Resources has completed the initial diamond drill program at the Salobro zinc project located in Brazil and received assays results from the drill campaign. 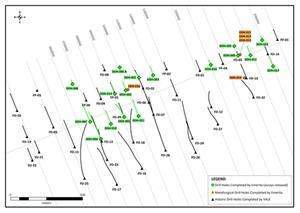 The Company also announces that David Gower, P.Geo., has been appointed the Chief Executive Officer of the Company, effective August 1, 2018.  Michael Timmins will become the Chairman of the Company’s Board of Directors.

The Company has completed 22 drill holes totaling 3,675.85 meters of drilling.  The drill campaign included thirteen drill holes which were designed to expand the existing mineral resource, four twin (TW) drill holes for QA-QC of the historical drilling to provide data necessary for completing a National Instrument 43-101 (“NI 43-101”) compliant mineral resource estimate, and five large diameter (PQ) drill holes for metallurgical test work (MET).  The MET holes were not assayed as this material is kept intact for grinding and flotation testing and will be analyzed as part of the metallurgical program in future.   A summary table with results of the drilling program is included below.  The key highlights from the drill program are as follows:

The diamond drill program was successfully completed and in line with the Company’s budget and publicly disclosed timeline.  The drill hole data for the mineral deposit is now being modeled by an independent qualified person, as defined by NI 43-101, and the initial NI 43-101 mineral resource estimate is expected to be published within the next two weeks.  The drill program has produced positive results as the limits of the mineralization have been expanded beyond the historical geological model.  The expansion to date is above the deepest point of the existing geological model which normally would have a positive impact on potential project economics.  The deposit remains open at depth.  See below for a complete summary of drill holes and drill hole locations.

David Gower, P.Geo., the current Chairman of Emerita and incoming CEO, commented: “The results of the drill program are highly encouraging in that we have increased the limits of the near surface mineralization which was a key objective of the program.  The NI 43-101 mineral resource estimate that is being prepared will be the basis for the planned Preliminary Economic Evaluation (“PEA”) and adding mineralization that does not require increasing depth should have a positive impact on the PEA results.  In addition, we have completed five large diameter drill holes that will provide material for metallurgical tests in support of the evaluation of the Salobro project.”

Carlos Cravo, P.Geo., Emerita’s Project Manager, stated: “We are excited about the results and the success of the program that targeted shallow mineralization.  The relogging of the historical drilling combined with the new data has resulted in an improved understanding of the deposit morphology that will improve drill targeting and should benefit any future mine plan should the deposit be put into production.”

The Company has reprocessed the geophysical data for the Project.  The geophysical interpretation of the historical work indicates that anomalies associated with the high grade mineralization of the deposit continues southwest beyond the drilling and represents a highly prospective target (note Figure 2).

Metallurgical (MET) drill holes were only estimated using PXRF (Portable X-Ray Fluorescence) as the core must be preserved in whole for grinding tests, etc. related to the metallurgical studies.

Emerita follows a systematic and rigorous QA/QC program overseen by Carlos H.C. Costa, P.Geo, Project Director of Emerita do Brazil, a subsidiary of the Company.

The sample from each core run is placed in a 100-centimetre long, wood core box that has four columns. Core recovery, rock quality designation, and geologic features are logged and sample intervals, which are generally <1.5 meters, are chosen. Prior to sampling, the drill core is marked by a line drawn along the core at high angles to the foliation, so that systematically the right side of the core is sampled. Each core box is photographed and then sampled with a spatula (soil and heavily-weathered rock) or cut with a core saw, 50% of which is placed in a sample bag to be sent to the laboratory. The other half core is retained for future reference. The Company independently inserts certified control standards, blanks, and duplicates, all of which comprise approximately 20.0 % of the sample batch, to monitor sample preparation and analytical quality. The samples are stored in a secure area until they are shipped to the ALS laboratory in Belo Horizonte (ISO 9001 Certified) for preparation and then sent for assay in the ALS laboratory in Peru. At the laboratory, samples are dried, crushed, pulverized and then a four-acid digestion is applied. This process is followed by the ICP-MS analytical technique for 48 elements, including lead. If zinc or lead exceeds 1.0 %, it is then analyzed using an ICP-AES analytical technique. The laboratory also inserts blanks and standards as well as including duplicate analyses. ALS is independent of the Company.  Widths of the intersections are interpreted to be close to true width based the angle of intersection relative to the geological model.