Eldorado Gold to begin construction of the decline at Lamaque 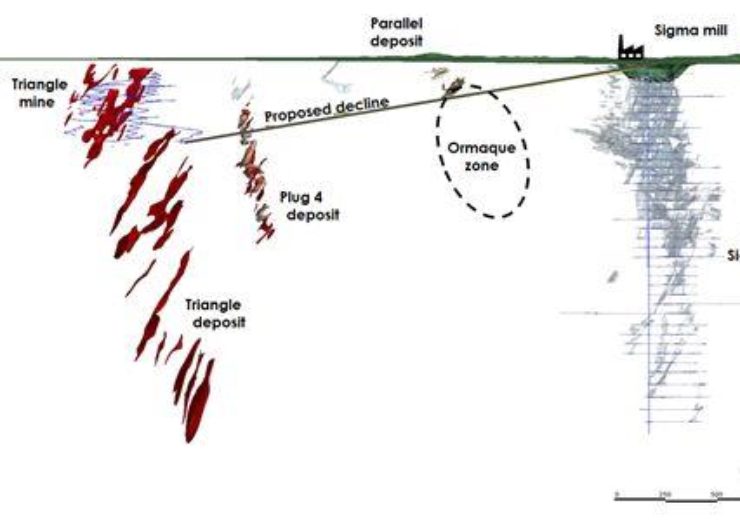 Section view of proposed decline from the Sigma mill to the Triangle mine. (Credit: Eldorado Gold)

Eldorado Gold Corporation (“Eldorado” or “the Company”) announces that it is commencing construction of a three kilometre decline, or tunnel, from the Sigma mill to the 405 metre level of the Triangle mine. The Company is also providing an update on several positive developments in Greece.

“We are pleased to begin construction of the decline at Lamaque this summer. This is a project that we have been advancing for nearly a year and is another step towards further production growth and continued value creation at Lamaque. We would like to thank the government of Quebec and all our local stakeholders for their continued support for this project and our Lamaque operations,” said George Burns President and CEO.

The fully permitted decline project represents a relatively modest investment that is expected to provide multiple near-term and long-term benefits as the Company continues to grow production at Lamaque. Detailed engineering and site preparations for the decline will commence this month and surface construction on the portal will begin in Q3 2020. The decline is expected to be completed by H1 2022 at an estimated cost of US$24 million. Additionally, the Company is evaluating the possible addition of an underground crushing and conveying system as well as a potential mill expansion. An update outlining the path forward at Lamaque is expected in Q4 2020.

Benefits to the decline include:

The Company provides an update on several recent developments in Greece including: