A EUR170m electricity network investment programme by the Hellenic Electricity Distribution Network Operator (HEDNO), a subsidiary of the largest power provider in Greece, PPC, will be supported by the European Investment Bank. 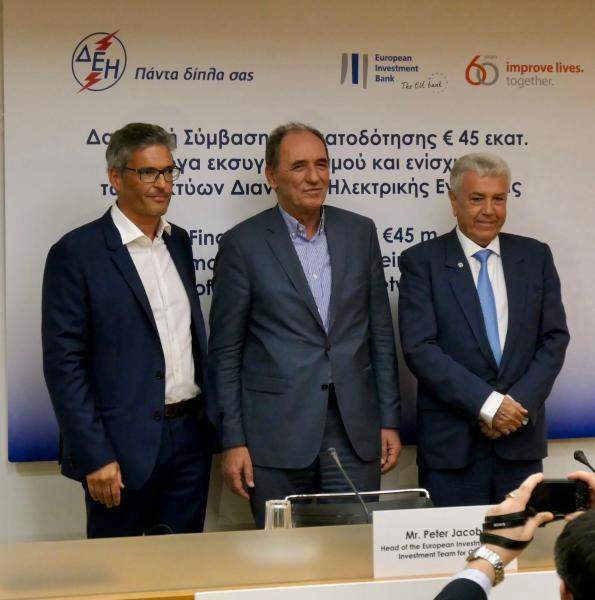 Image: The EIB will finance 50% of the new scheme that will reinforce and modernise electricity distribution across the Greek mainland and islands. Photo: Courtesy of European Investment Bank.

The EIB and PPC today signed the second loan amounting to EUR 45 million within the total loan facility of EUR 85 million. The EIB will finance 50% of the new scheme that will reinforce and modernise electricity distribution across the Greek mainland and islands and enable the national network to better supply renewable energy.

The importance of new energy investment in Greece and crucial need to upgrade electricity distribution infrastructure to ensure reliable supply was highlighted ahead of the signature of the Financial Contract for the EIB’s long-term loan in Athens earlier today.

“Long-term investment to modernise and reinforce electricity infrastructure across Greece is essential to ensure reliable electricity supply and cater for increased energy needs in the years ahead. The European Investment Bank is a long-standing partner of the Greek energy sector and the EIB’s technical expertise and financial support has strengthened energy investment across Greece for decades. I welcome this new EIB backing that will improve electricity distribution in the years ahead and reflects the firm engagement of the EIB in Greece.” said Mr. Giorgios Stathakis Minister of Energy & Environment.

PPC’s Chairman and CEO Mr. Manolis Panagiotiakis stated that “the role of the Distribution Network, an imperative parameter for the operation of electricity, becomes extremely important for green energy and consumer’s participation, within the European policy framework and in correlation with all relative technological developments. The Greek Distribution Network is a very valuable asset that PPC Group possesses. Within this context, the signing of the second loan agreement amounting to € 45m within the total loan of € 85m, is of exceptional importance and we would like to thank EIB one more time for being here today, facilitating further our strategic plans to reinforce and modernize the Distribution Network across the Greek mainland and islands.. EIB is a strategic financing partner of the Company that supports its investment program with respect to projects of major importance related to PPC’s business plan on the economy, the Greek consumers, the security of supply of the country and the environment.”

The new EIB loan to support investment by HEDNO follows successful implementation of investment in electricity distribution infrastructure previously supported by the EIB and is guaranteed by the Hellenic Republic.

Strengthening electricity infrastructure across the country

Under the EIB backed investment programme, HEDNO will upgrade and reinforce electricity distribution across Greece, including large-scale investment in Athens, northern Greece and Crete.

The distribution investment programme will further strengthen connections to new renewable energy schemes and reduce the level of electricity lost through theft.

Upgrading the national electricity distribution network will enable Greece to increase use of the renewable energy resources and achieve multiple energy policy objectives including meeting environmental and climate goals and enhancing energy security.

The European Investment Bank has provided more than EUR 5.9 billion for energy investment across Greece since 1964, including EUR 3.1 billion in the last decade.

This has included backing new investment in wind energy, power distribution and transmission, energy efficiency and security of energy supply projects and technical assistance to share experience from similar schemes elsewhere in Europe.