Desert Mountain Energy announces discovery of helium concentrations up to 1.3622% on its Oklahoma Kight-Gilcrease property

Desert Mountain Energy announced that analytical tests performed on gas samples from three existing oil & gas wells in the Company’s Kight-Gilcrease Sand Unit oil field in Seminole County, OK returned positive results for the presence of helium, with concentrations up to 1.3622% He. 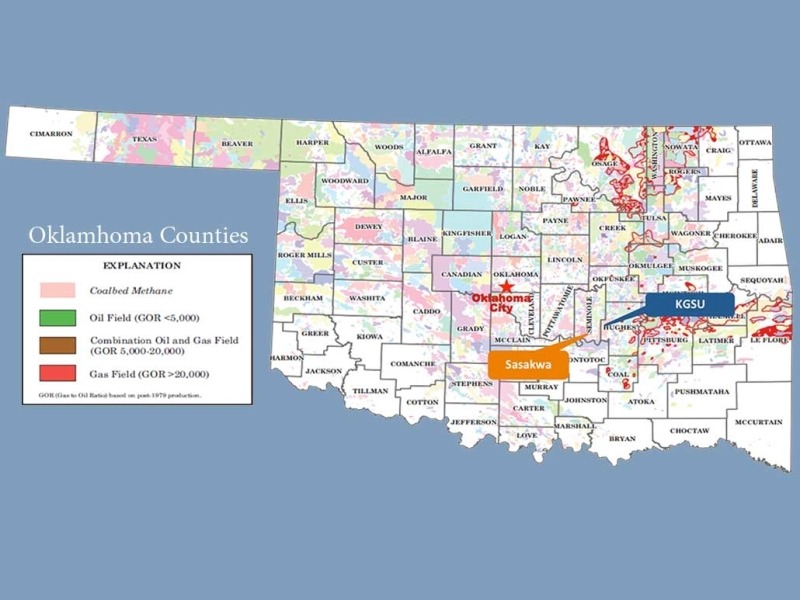 Image: The KGSU is located in an area of Oklahoma which has been host to numerous helium bearing natural gas wells. Photo: Courtesy of Desert Mountain Energy-TSX-V.

These initial test results are viewed by management as highly encouraging and suggest the potential for future development of helium production from the KGSU.  This gives the Company another highly prospective property for Helium development in addition to its flagship Heliopolis Project in Arizona’s Holbrook Basin.

The KGSU is located in an area of Oklahoma which has been host to numerous helium bearing natural gas wells, with commercial production grades typically ranging from 0.6% to 1.4% He. The Hugoton Field in Kansas, Oklahoma and Texas, among the nation’s largest natural gas fields, has produced helium ranging from 0.3% – 1.92%, with future production grades estimated to be in the range of 0.5% (The Edison Helium Macro View Update February, 2019). Current test results from the KGSU are consistent with helium concentrations being produced from other U.S. natural gas fields.

While the KGSU remains a strong target for enhanced secondary water flood production of oil, management has viewed it also as highly prospective for helium.  Accordingly, a preliminary program of testing was recently conducted by sampling gas from some existing well bores on the property.  (See PR dated April 16, 2019). These tests were conducted by sampling gas from the Gilcrease Sand zone utilizing old perforations in the wells which ranged from approximately 2700 ft to 2880 ft in depth.  The gas samples were sent to independent analytical laboratory V.R. Curry Labs of Bristow, OK for analysis.  Curry Labs has conducted gas analysis for decades for exploration, production and gas gathering companies in Kansas, Oklahoma and Texas. Results are summarized below.

Helium is the second lightest element (next to hydrogen) and has the smallest molecular size of any element on earth.  Accordingly, it defies gravity and tends to rise to the surface of the earth’s crust and dissipate into the atmosphere and space unless it is retained by effective trapping mechanisms underground. Three stratigraphic zones above the Gilcrease Sands, namely the Booch, Senora and Earlsboro Sands, are viewed as highly prospective for helium gas in the KGSU.  These zones range from 2160 to 2728 ft in depth and provide a wide target for additional helium, potentially higher in grade than that now sampled from the Gilcrease Sands due to the above-noted tendency of helium to rise toward the surface.  These zones are viewed as highly prospective because of their dense lime or anhydrite cap and close proximity to known or indicated fault structures.  The discovery of helium gas just below them in the Gilcrease Sands is extremely suggestive that He will also be found in these zones.

The three wells reporting positive results for helium were situated higher on structure in the KGSU; three other wells lower on structure were also sampled but predictably did not return notable helium values.  This is reflective of helium’s tendency to rise in structure until it bumps up against an impermeable cap.  Commercial viability of helium production from the KGSU will ultimately depend upon grade, pressure and size of the helium reservoir.  Next steps would be drilling of several new shallow gas wells in the KGSU to test for the presence and concentrations of helium in the three zones above the Gilcrease Sands as well as to test the extent of the potential helium reservoir.

All three wells encountered significant dense limestones and anhydrites above the Gilcrease Sand Formation.  Whilst the older wells were drilled when open hole well logging was just starting, the 3PBS well being drilled in 2004 had the newest open hole well logging technology utilized.  Much of the old drillers’ logs physical description of the formations encountered correlated directly to the newest open hole logging tools.

The well logs from the 3PBS well clearly show dense limestones and anhydrites above the Gilcrease Sand Formation and above the sequence of the Booch, Senora and Earlsboro Sand Formations.  Drilling time on the 3PBS well increased from 2-3 minutes per foot to a high of 45 minutes per foot in the dense limes and anhydrites.  The open hole Compensated Neutron Density logs show these dense limestones and anhydrites have minimal porosities of between 0.05% and 3% and shale limestone formations which when combined serve as an effective barrier to migration of both hydrocarbons and Helium.  The sands above 1,300’ have little to no gas and the oil is a low gravity, (19-21 gravity API,) oil concentrations are constrained to small pockets which would tend to confirm the lower seals were and still are effective in limiting the movement of Helium, oil and natural gases to shallower formations.  Consequently, the company considers the sand formations directly above the Gilcrease Sand Formation as highly prospective.

By way of background, The KGSU was permitted and approved by Oklahoma Corporation Commission (“OCC”)  by Order #375263 dated July 19, 1993, as an enhanced oil recovery project primarily utilizing water-flood secondary recovery operations, in an administrative proceeding which consolidated and unitized all working and royalty interests in the project.  The KGSU has had historic production estimated at 1,690,240  BO by the OCC and presently has 7 wells on site, one of which is operational. The oil produced is a light sweet crude that varies from 34 API to 43 API gravity.

The KGSU comprises an area of approximately 883.7 acres, which is substantially underlain by the Gilcrease Sandstone common source of oil supply.  The KGSU leases are located 8 miles S of Wewoka directly astride State Highway 56, in a portion of the S/2 of Section 6, all of Section 7 and the NW/4 of Section 18, T6N R8E Seminole County, Oklahoma.  It is not located within an environmentally sensitive area or on a known Native American reservation. The oil-bearing pay zone was estimated by the OCC to be from 10 ft to 40 ft in width and to occur at a subsurface depth of approximately 2726 ft to 2810 ft, as reflected in geophysical logs from the Adams #1 Maverick Well drilled in the SW/4 SE/4 SW/4 of Section 7-6N-8E, Seminole County.

According to Irwin Olian, CEO of the Company, “We are very excited by the gas test results at the KGSU, as they confirm the presence of helium gas on the property in concentrations typically found in other producing natural gas fields in the U.S.  While the Heliopolis Project in Arizona remains our flagship property and immediate priority, it is encouraging to have another property in our portfolio with strong potential for helium production down the road.  The KGSU also remains a secondary water flood prospect for oil production, which we hope to initiate in the next year.”