The $468m diamond recovery vessel represents the largest ever single investment in the marine diamond industry. 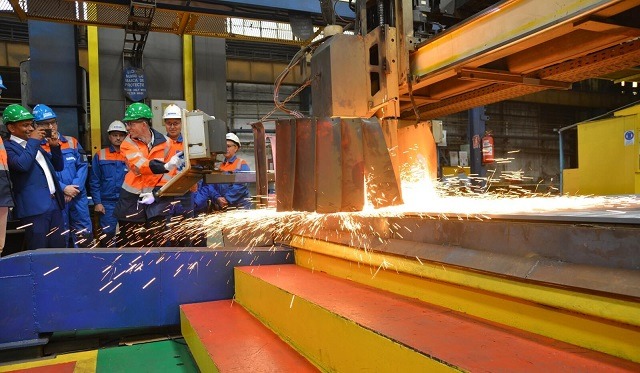 Image: Officials from Damen Shipyards during the steel cutting ceremony to mark the start of construction on the new offshore mining vessel. Photo: courtesy of Damen Shipyards Group.

Debmarine Namibia, a 50/50 joint venture between De Beers and the Government of the Republic of Namibia, has approved the construction of what it claims to be the world’s first ever custom-built diamond recovery vessel.

Estimated to cost $468m, the new vessel represents the largest ever single investment in the marine diamond industry. It will become the seventh vessel in the Debmarine Namibia fleet.

The new vessel is expected to add 500,000 carats annually to Debmarine Namibia’s production

Upon commissioning scheduled in 2022, the ship will add 500,000 carats annually to Debmarine Namibia’s production. This represents an increase of approximately 35% on Debmarine’s current production, the Namibia marine diamond mining company said.

De Beers Group CEO Bruce Cleaver said: “Some of the highest quality diamonds in the world are found at sea off the Namibian coast.

“With this investment we will be able to optimise new technology to find and recover diamonds more efficiently and meet growing consumer demand across the globe.”

Damen Shipyards will build the ship, which will feature the latest marine technologies capable of driving improved safety performance while optimising efficiency and utilisation rates.

In connection with the project, Damen Shipyards has organised special steel cutting ceremony to mark the start of construction on the new offshore vessel at its Mangalia yard.

The move is part of Damen’s contract awarded in 2019 by De Beers Marine Namibia to build a new 57ft-long crawler diamond recovery vessel for offshore operations in Namibia.

The new vessel will be integrated with a dynamic positioning system (DP2) based on a seven-thruster propulsion system powered by six generators of 3230eKW each.

“Once the vessel is delivered by Damen, it will be sailed to South Africa where the mission equipment will be integrated into the vessel by De Beers Marine.”

De Beers Marine Namibia currently operate the largest offshore mine in the world off the south west coast of Namibia. It is located at a water depth of between 90 and 150 metres.