The shipment of LNG totaled approximately 18,000 gallons and was made possible by Cryopeak's proprietary "Super B-Train" 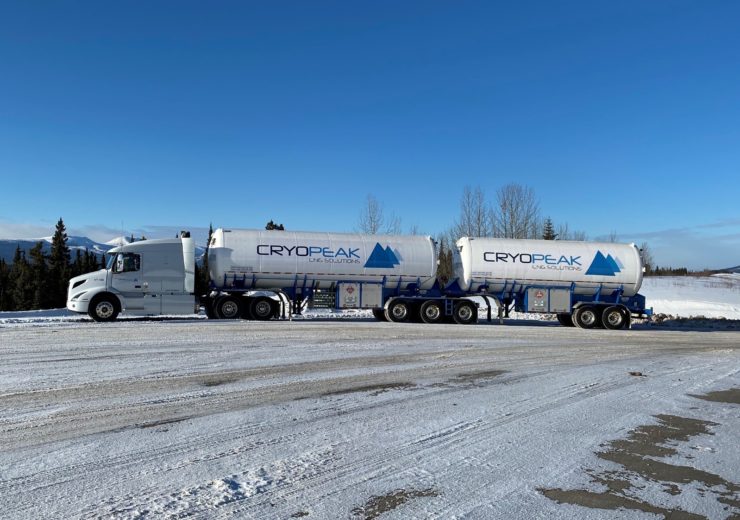 Cryopeak LNG Solutions Corporation, based in Richmond BC, has completed  the largest ever North American delivery of liquefied natural gas (LNG) by truck, with the shipment going to power the Silvertip mine on the Yukon/BC border owned by Coeur Silvertip Holdings Ltd. (Coeur Silvertip), a subsidiary of Coeur Mining, Inc.

The shipment of LNG totaled approximately 18,000 gallons and was made possible by Cryopeak’s proprietary “Super B-Train.” Cryopeak’s mission is to provide LNG to remote locations in the most reliable, sustainable and economic manner possible. Cryopeak primarily focuses its fuel delivery efforts on the mining industry as well as for power for remote communities through commercial partnerships that help their customers reduce carbon footprint, lower energy costs and maximize operational efficiencies.

Cryopeak’s Super B-Train is designed to have up to 70 percent greater load capacity than standard trailers operating in Canada today, improving LNG’s competitiveness as a fuel source for remote mining locations and communities. Understanding that transportation often represents the largest cost of LNG for customers, Coeur Silvertip was eager to work with Cryopeak on this initiative.

“We are pleased to support the development of the new Super B-Train LNG trailer which will increase LNG payload and decrease transportation costs of LNG to the Silvertip mine,” said Rick Loughery, Purchasing Manager for Coeur Silvertip.

Coeur Silvertip has been a pioneer in the use of LNG as a fuel at its remote mine site in Canada. Typically, remote off-grid mines are powered by diesel or other liquid fuels. Cryopeak has worked with Coeur Silvertip to transition its operations to a more environmentally sound fuel solution of LNG. This transition has displaced high-cost diesel consumption at the mine and lowered the emissions profile.

“Lowering LNG costs through maximizing transportation payload is an important initiative for Cryopeak and our customers. We are excited that this technology is now proven and going forward we will seek to extend the operation of this new trailer across Canada,” said Calum McClure, CEO, Cryopeak.