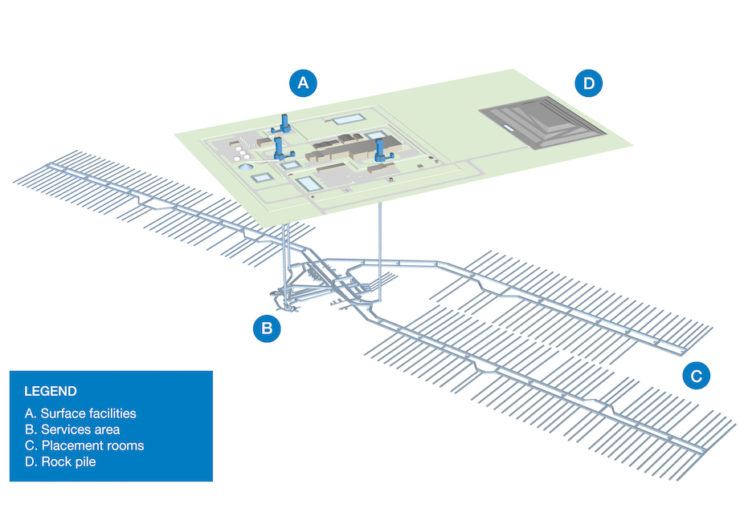 Canada has entrusted to the Nuclear Waste Management Organization (NWMO) the important responsibility of managing the country’s used nuclear fuel over the very long term.

Since its inception, the NWMO has been working to ensure the plan it implements on behalf of Canadians is both technically safe and socially acceptable.

In Canada’s plan the NWMO will safely store Canada’s used nuclear fuel within a deep geological repository about 500 metres underground in a suitable rock formation.

The use of a deep geological repository is consistent with international best practice. This approach is the culmination of more than 30 years of research, development and demonstration.

Within the repository, a series of engineered and natural barriers will work together to contain and isolate used nuclear fuel.

The five barriers are the fuel pellet, the fuel bundle, the used fuel container, the bentonite clay buffer box and the geosphere. Each barrier provides a different and stand-alone level of protection.

In 2010, the NWMO initiated a site selection process to seek informed and willing hosts for the project.

This process started with 22 municipalities and indigenous communities that expressed interest in exploring their potential to host the project. The NWMO gradually narrowed its focus to fewer areas through technical site evaluations and social engagement.

The NWMO is on track to select a single preferred site for its used nuclear fuel repository by about 2023.

As Canada approaches this important milestone, technical specialists at the NWMO will continue to validate the safety and effectiveness of the components of the engineered barrier system.

The container is made of carbon steel for strength and coated with corrosion-resistant copper.

The copper directly adheres to the steel, so the two materials act as one assembly. In the unlikely event that the used fuel container becomes deformed, it will retain its corrosion resistance.

The NWMO designed, developed and fabricated a first-of-a-kind system in 2019, to clad its used fuel steel containers with copper through an electroplating process.

The electroplating process takes place in the NanovateTM Tank System (NTS) and the NWMO worked with industry vendors to create a purpose-built, first-of-a-kind tank.

“It’s a novel tank that took previous existing technology and scaled it up, making it larger to accommodate the NWMO’s used fuel containers. We’re proving that we can do this process at the scale needed,” says Chris Boyle, director of engineering at the NWMO.

The NWMO worked with a Canadian industry partner on the electroplating process to create copper cladding that is 4-5mm thick as plated.

Although electroplating has been around for at least 100 years this is one of the first adaptations of the technology to create thicker cladding.

The NWMO has begun serial production of prototype containers for used nuclear fuel. Up to 20 will be produced by 2021.

During the demonstration process, the organisation’s facility in Oakville, Ontario, will be used as a distribution hub for container parts. From here they are shipped to various contributors to the programme for processing, such as machining, copper-coating and welding.

“Our programme has moved from concept to small- scale development trials of processing technology, to a first early container prototype, and now to proof testing and serial prototype production,” says Dave Doyle, manager of used fuel container design at the NWMO.

As part of the multiple-barrier system, the used fuel container will be placed in a highly compacted bentonite clay buffer box and these will be emplaced in Canada’s deep geological repository.

The NWMO chose to use bentonite clay for the buffer box and repository backfill because it is proven to be a powerful barrier to water flow.

A natural material formed from volcanic ash, bentonite clay swells when exposed to water, making it an excellent sealing material.

The method in Canada will be to pre-assemble the used fuel container and buffer box above ground and then place this ‘super-container’ in the deep geological repository.

“The advantage is a lot of the assembly work can be done at surface level, potentially simplifying the emplacement concept,” says Boyle.

“Although Canada did not invent the super-container idea, we’ve made significant enhancements including ongoing testing with the objective to eliminate the need for a metal frame,” he adds.

The NWMO found in optimising the container for Candu fuel that it could be made smaller and lighter than for other countries. Conventional-sized equipment can be used for placement.

Before the trials begin, the NWMO’s engineering specialists are exploring variations in the buffer box assembly and emplacement equipment to provide the safest and most robust performance.

The NWMO will select a site with either crystalline or sedimentary rock for its deep geological repository.

Both these types of rock are suitable because their geological characteristics are stable over time and have low permeability, which means there will be little groundwater movement.

Canada’s repository will consist of a network of underground placement rooms, along with surface facilities where the NWMO will receive, inspect and repackage the used fuel into purpose-built containers.

Building on the industry standard, the NWMO continues to evolve the conceptual design of its repository.

It will include a central services area, which allows for the ventilation of the underground repository through three shafts located within a single secure area.

The layout has several access tunnel arms that enable the NWMO to situate placement rooms in areas with the most suitable rock.

“As we learn more about potential sites, we are continually updating our conceptual designs to improve the operations and logistics of the repository while optimising layout flexibility, ease of construction and concurrent placement and development activities,” notes Chip Lee, manager of mining and repository engineering.

As the NWMO acquires additional site-specific information, it will continue to evolve the repository design.

Canada’s plan for used nuclear fuel will only proceed with informed and willing hosts, including municipal, First Nation and Métis communities.