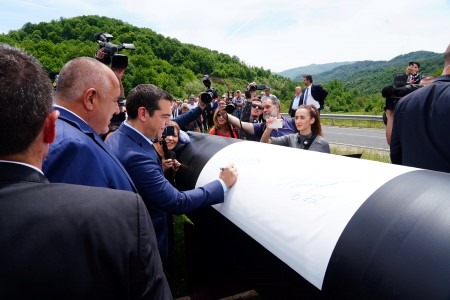 Bulgaria and Greece have broken ground on the IGB gas pipeline, a 182km gas interconnector project between the two countries, which is being developed with an investment of €240m (£211.89m).

The IGB gas pipeline is being developed by Bulgarian Energy and IGI Poseidon under a jointly owned holding company ICGB. IGI Poseidon is owned by Public Gas Corporation of Greece (DEPA) and Italian energy company EDISON.

The projected transmission capacity of the gas interconnector project is up to 3bcm per year, in the direction from Greece to Bulgaria. Through a new compressor station and by enabling physical reverse flow, from Bulgaria to Greece, the capacity of the pipeline can be increased to up to 5bcm per year based on market interest and other factors.

The 32” IGB gas pipeline will be laid between Komotini in Greece and Stara Zagora in Bulgaria. Scheduled to begin operations in 2020, the gas interconnector project will connect the transmission systems of DESFA and TAP in Komotini with Bulgarian Bulgartransgaz’ transmission system.

The pipeline project is expected to improve the security of supply and enable the diversification of gas supplies for Bulgaria and the South Eastern Europe (SEE) region.

ICGB Bulgaria executive officer Teodora Georgieva said: “The continuous corporate efforts of ICGB and its shareholders, the political will of the governments of Bulgaria and Greece and the unquestionable support from the EC helped us to successfully overcome the challenges before IGB.”