Broadway Gold Mining announced that it has acquired an 85% interest in an extensive land package in Namibia, Africa. 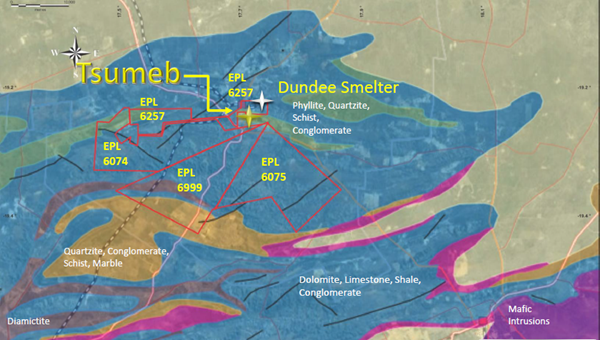 “Namibia is a mineral-rich country with world-class base-metal and uranium deposits. Broadway’s management team has successfully worked in the country for over 19 years, and delivered a number of unique opportunities to shareholders during this time,” says Duane Parnham, Executive Chairman of Broadway. “Over the years, Namibia has grown into an excellent, development-friendly jurisdiction with mining companies like B2 Gold, Dundee and others successfully operating in the country, and we look forward to establishing a strong exploration presence. We believe our access to the Tsumeb mining camp will give us another opportunity to show that we can upgrade a promising project to development or alternatively attract a major partner like Kennecott, a division of Rio Tinto, at our Madison copper project located south east of Butte, Montana.”

Four Exploration Prospecting Licences (“EPLs”) – 6074, 6075, 6257 and 6999 – have been purchased with known mineralization over a total strike length of 30 kms west of Tsumeb, Namibia. Within these licences, which cover 56.3 square kms (see Figure 1), ten former vanadium mines and prospects occur as well as three former copper mines, five of which produced unknown amounts of vanadium in the early half of the 20th Century. All the past-producing mines and prospects on the EPLs are hosted in the Tsumeb Super Group and include the Alt Bobos, Bobosberg N and S, Torassen, Uris, Karavatu, Tsumeb West, Tsumeb and Freisenberg mines.

The four EPLs also cover numerous copper occurrences that extend from and surround the Tschudi copper mine (49.7 Mt of .8% Cu) (from published reports by Weatherly Mining), and this copper horizon extends east to the Tsumeb Mine, which produced 30 Mt of 10% Pb, 4.3% Cu, 3.5% Zn, 100 ppm Ag (3 oz), 50 ppm Ge (germanium) with other amounts of Sb, Ga, Cd by-products from 1905 to 1996 (from production records published by the Geological Survey of Namibia).  Unmined zones still remain to the side of the main mine workings and will be followed up in a planned exploration program. The Tsumeb West Mine known for copper, silver and vanadium production lies within the EPLs. Tsumeb West was briefly mined in 2007-2008. The Tsumeb smelter, owned and operated by Dundee Precious Metals of Toronto, and the town of Tsumeb (44,000 pop.) sit on the eastern boundary of the property.

Approximately 35 kms east, the four EPL licences surrounding Tsumeb, the Abenab and Christina mines were larger producers of vanadium (please see information published by Golden Deeps Limited of Australia, including its news release dated April 8, 2019, and the Geological Survey of Namibia). These deposits, on the properties of Golden Deeps Limited, are all hosted in Neoproterozoic sediments and the majority of the vanadium occurs in the Tsumeb Super Group of rocks in brittle fracture zones and breccia pipes. The figures quoted in this news release are taken from a publication by the Geological Survey of Namibia.

Broadway has signed license transfer agreements with three separate Namibian corporations to acquire an undivided 85% interest by paying a total of US$50,000 and issuing three-million common shares. The agreements are subject to TSXV approval and successful transfer of 85% interest in the EPLs into a Namibian corporation 100% controlled by Broadway.