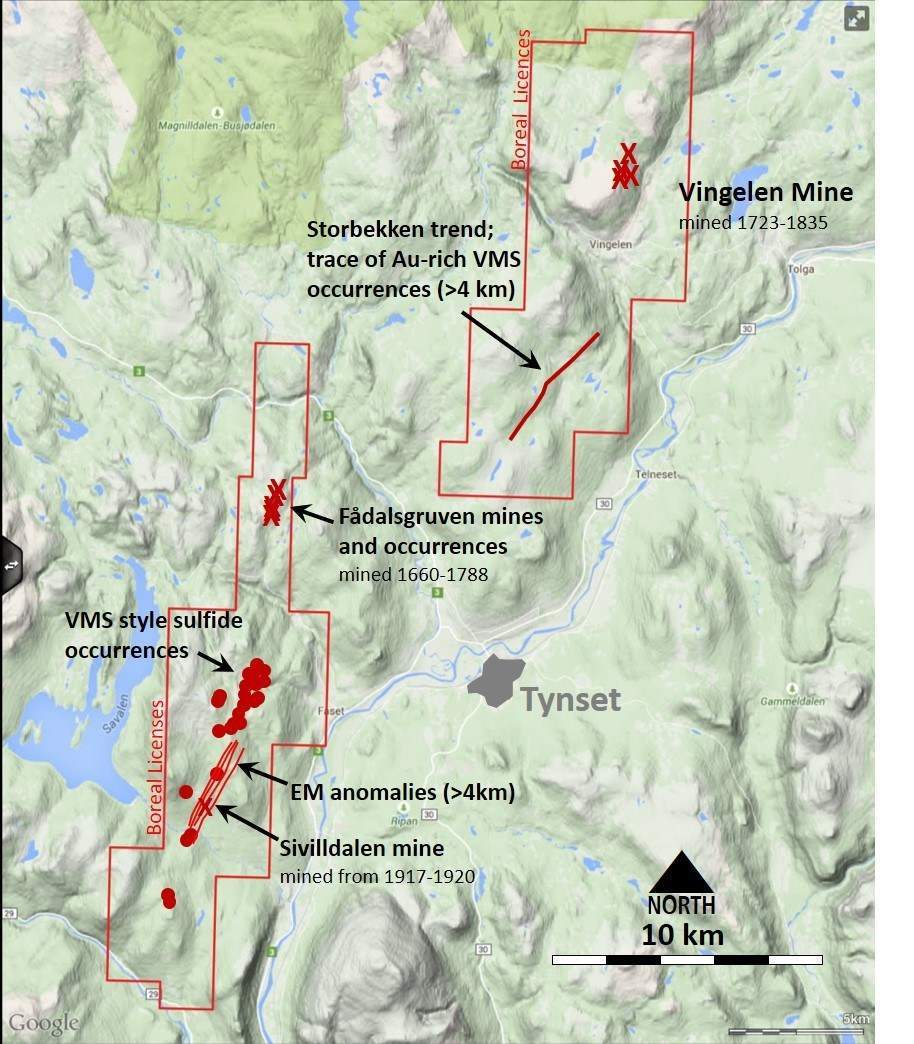 The Tynset project is located in the historic Røros District, Norway’s most prolific base metal district.

“We are excited to announce the commencement of the Tynset programs in Norway.  The exploration of Tynset’s 30 km trend of VMS style mineralization is an extremely important target for Boreal’s exploration growth strategy,” stated Karl Antonius, President and CEO.

Surface sampling, mapping and geophysical programs have commenced at Tynset, and will initially focus in the vicinities of the historic Vingelen, Fådalsgruven and Sivilldalen mines.  Those mines operated at various times from the 1660’s at Fådalsgruven through the early 1920’s at Sivilldalen.  Although historical production focused on copper, significant zinc mineralization is present in all of the mining areas as seen in outcrop exposures and in mine waste materials. These initial work programs will consist of surface sampling of soil and glacial till materials along projections of zones of mineralization in and around the historic mines.

The goal of the programs is to further refine drill site selections, in anticipation of future drilling in 2018 or 2019, and to identify additional zones of copper and zinc mineralization in the area.

The Tynset project is comprised of 17 exploration licenses totaling 17,000 hectares in the Røros Mining District in central Norway, and hosts a 30 kilometer trend of VMS style mineral occurrences and historic mines, including the Vingelen, Fådalsgruven and Sivilldalen mines.  Little exploration work has been conducted within the licenses of the Tynset project over the past 30 to 40 years.  However, sampling by the Norwegian Geological Survey in the 1990’s and EMX has shown evidence for zinc, gold, and silver enrichments in several of the historic mines and prospects, and the Company believes that good potential exists for discovery of zinc and precious-metal enriched VMS deposits.

Additionally, the historic drilling that has been conducted in the mining areas has been very limited and shallow.  Significant potential exists for additional discoveries at depth and along strike of the historic mines.