The metal structure, with a weight of 196 tonnes and a height of 11 metres, was lifted safely from its concrete shield and relocated to the recently completed underwater cutting facility 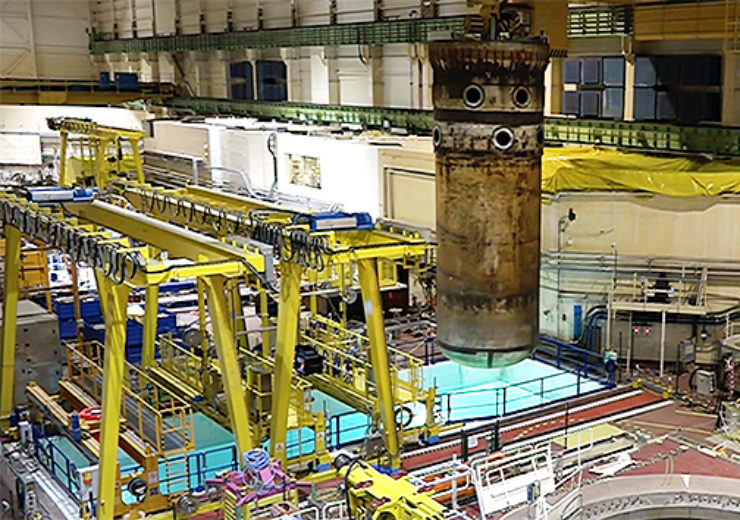 The programme to decommission the Bohunice V1 nuclear power plant in the Slovak Republic has achieved a major milestone, with the successful removal of the first reactor pressure vessel that will now permit remote dismantling of the facility.

The metal structure, with a weight of 196 tonnes and a height of 11 metres, was lifted safely from its concrete shield and relocated to the recently completed underwater cutting facility. A reactor pressure vessel is the heart of a nuclear reactor in which the nuclear process of boiling water and producing the steam required to drive the turbines for electricity takes place.

Tomáš Klein, Director of Decommissioning at the Project Management Unit, said: “This marks a very important milestone in our safe and efficient decommissioning process. The upcoming dismantling activities of activated components like the reactor pressure vessel and reactor internals will eventually reduce the radioactivity of the site by almost 100 per cent by the end of 2022.”

As a next step, the reactors will be dismantled remotely and the materials processed for safe storage or disposal.

Project manager Tibor Rapant commented: “Transportation of the reactor pressure vessel to the fragmentation workplace represents the completion of a two-year-long process. The transport itself was carried out using the reactor hall main crane with a capacity of 250 tonnes and lasted approximately three hours. Waste from dismantling activities will be safely stored or disposed of at the national radioactive waste repository and the Bohunice Interim Storage Facility.”

The operation was performed successfully despite the current health and safety regulations in place to prevent the spread of the coronavirus pandemic. Work in Bohunice continued in recent weeks during emergency measures, which have now been revoked.

The decommissioning of units 1 and 2 of the Bohunice nuclear power plant is prepared and implemented by Jadrová a vyraďovacia spoločnosť, a.s. (JAVYS) and financed by the Bohunice International Decommissioning Support Fund, established in 2001. Contributors to the fund are the European Commission as well as Austria, Denmark, France, Ireland, the Netherlands, Spain, Switzerland and the United Kingdom. The European Bank for Reconstruction and Development acts as fund manager.

The fund finances and co-finances selected projects to support the decommissioning of units 1 and 2 of the plant in a safe, secure and cost-effective manner and to introduce new measures in the Slovak energy sector to help minimise the impact of the closure of units 1 and 2 by improving the efficiency of energy supply and consumption. To date, the fund has received more than €650 million and operations are well on track to complete the decommissioning on target by 2025.

Steve White, EBRD Director of the Bohunice International Decommissioning Support Fund, said: “The successful safe removal of the first pressure vessel represents not only the completion of a major milestone; it is also testament to the hard work and dedication of the Slovak site project team and the Westinghouse-led consortium.”

The EBRD is the only international financial institution engaged in nuclear safety and decommissioning programmes and has been active in the field since 1993. In addition to its work in the Slovak Republic, the Bank is also active in the decommissioning of former Soviet-type nuclear reactors in Bulgaria and Lithuania, the transformation of Chernobyl, the management of radioactive waste in north-western Russia and in work to overcome the legacy of Soviet-era uranium mining and processing in Central Asia.