Banks Renewables, the renewable arm of the Banks Group, has completed an £82m refinancing deal to help fund the next stages of its development of renewable projects in the UK. 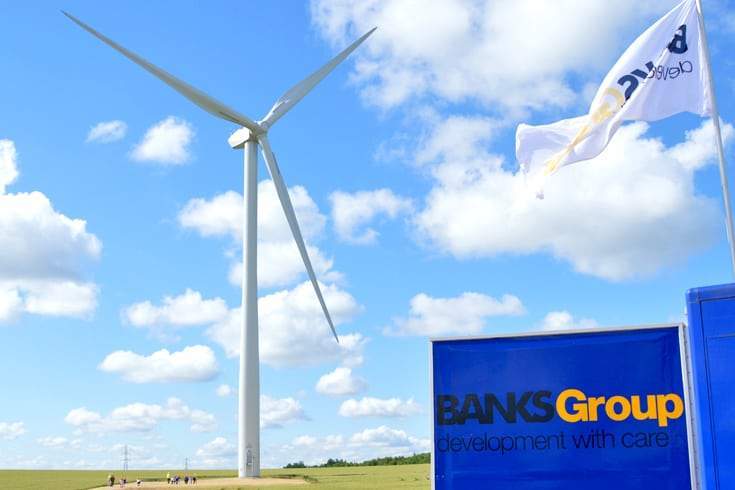 The Durham-headquartered firm has worked with lenders National Australia Bank and Santander to agree a refinancing deal for seven of its existing wind farms across northern England, five of which were built using external finances and two using Banks’ own capital reserves.

The new funding will be utilised in a number of projects, including Banks Renewables’ forward programme of onshore wind farms as well as for a number of other projects across the wider group.

Banks Renewables currently has a total generating capacity from its onshore wind farms, both in operation and construction, of 224MW, with further schemes with a total capacity of 190MW at different stages of development.

It’s the second time that the family-owned firm has secured substantial finance from National Australia Bank and Santander, with both lenders contributing to the transformational £210m investment package that Banks obtained last year to support the construction of the Kype Muir and Middle Muir wind farms in South Lanarkshire, and the Moor House wind farm near Darlington in County Durham.

Moor House began generating green electricity at the start of 2018, while Middle Muir is scheduled to go live later in the year and Kype Muir is due to follow early in 2019.

PWC and Ashurst advised Banks Renewables on the refinancing deal, while the lenders were advised by Burges Salmon.

Additional support for the transaction was provided by EY, Muckle, Womble Bond Dickinson and Brodies.

The Banks Group group finance director Simon Fisher said: “Banks Renewables is firmly established as one of the UK’s leading owner/operators in the onshore wind sector and this latest financial agreement will enable us to implement our plans for the next stages of the company’s development.

“We have strong relationships with both Santander and National Australia Bank, and their commitment to this new agreement is a real expression of confidence in both our business and the wider UK onshore wind sector.

“Onshore wind is widely recognised as being the most effective technology in delivering carbon reduction targets for the UK at the lowest cost for the consumer, while the latest industry research shows a clear and increasingly positive public appetite for it to play a larger part in the mix of energy generation sources that the UK needs to power its homes, businesses, schools and hospitals.

“We are continuing to move projects forward which will further extend our presence in this sector and are excited at the opportunities that this new capital will enable us to pursue.”

“With renewable energy financing being a strategic priority for NAB, we are delighted to be providing capital that will be available to support the continued development of Banks Renewables onshore wind business here in the UK.”

Santander executive director Fernando Dominguez de Posada said: “We are extremely pleased to have delivered this financing solution to Banks Group and been able to continue supporting the development of its onshore wind portfolio.

“This is another example of Santander’s ability to deliver value to its clients as one of the leading renewable energy financing houses in the UK.”