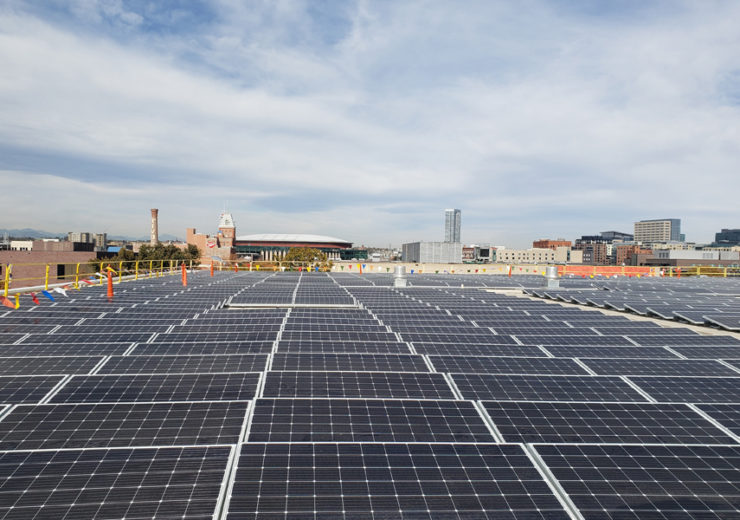 The Auraria Sustainable Campus Program (ASCP), in partnership with the Auraria Higher Education Center (AHEC) and Namastè Solar of Boulder, is nearing the completion of a 779 kW solar array installation atop the Auraria Library.

The installation is the largest single-roof solar array in downtown Denver according to Xcel Energy. It will be fully functional in early November and will power two-thirds of the Auraria Library’s electricity needs.

“Auraria Campus is fortunate to be situated in one of the most solar-friendly climates in the country and the new solar array reinforces our ongoing commitment to renewable energy initiatives on campus,” Colleen Walker, AHEC CEO, said.

The 2,100-panel array will produce approximately 1 million kWh annually – or enough energy to power 100 average U.S. homes each year. It will supply 2.5% of the annual campus-wide power consumption, increasing the Auraria Campus solar capacity tenfold to 854 kW. The array will also play a big role in lowering Auraria Campus greenhouse gas emissions by saving an estimated 1.2 million pounds of CO2 from entering the atmosphere each year. Additionally, the energy savings from this project will help increase the ASCP’s annual funding by 10-15% and allow for other impactful projects on campus.

“This is a huge win for the Auraria Campus and the ASCP. Our students and staff have worked so hard to make this a reality. We’re really proud of this project and we’re excited to keep making meaningful progress in this community,” said Chris Herr, the Sustainability Officer for the Auraria Campus.

The ASCP was established in 2011 as the result of a student-led initiative focused on reducing the ecological impact of the Auraria Campus as a whole.

“We’re inspired by the tremendous effort the city, county, and state is making to transition to a clean energy economy and we’re thrilled to be able to significantly contribute to the greening of our local grid,” said ASCP Sustainability Coordinator Jackie Slocombe.

In addition to the ASCP’s renewable energy initiative, there are also many student- and program-led initiatives actively focused on addressing water conservation, waste diversion, and alternative transportation.

“The solar energy from this system will benefit the Denver community,” said Eliot Abel, director of commercial project development at Namasté Solar. “With projects like this, Denver residents will benefit from improved air quality thanks to clean, emission-free energy.”

The 150-acre Auraria Campus serves the Community College of Denver, Metropolitan State University of Denver, and the University of Colorado Denver. AHEC is the Colorado state entity that serves as the umbrella organization for the Auraria Campus. The collective student, faculty, and staff population is approximately 43,000, making it the largest campus in Colorado. To learn more about the ASCP, visit www.sustainableauraria.org.